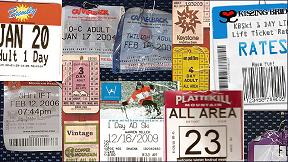 Will RFID technology mean the extinction of the “Ticket Turkey”?  You know, the Ticket Turkey is that guy with every lift ticket he ever bought still attached to his parka.  And when the rest of us see him we say “What a turkey!” … or something worse!

I believe “turkey” is the appropriate term since the male turkey (the bird) fans out his tail feathers to impress the female.  The Ticket Turkey fans out his tickets to also impress, but I’m not sure who he is trying to impress.

In the 1960s and 1970s you would rarely go through a day of skiing without a Ticket Turkey sighting. However through the years sightings have gotten rarer.  Although just this past weekend I did spot one! He was a young one with only 8 – 10 tickets attached.

In recent years it’s more likely to see people who have selectively preserved a few lift tickets usually from prestigious ski areas such as Deer Valley or Vail.  I don’t find these as offensive since the tickets provide a good conversation starter when you’re riding the gondola.

But with the new RFID technology you can use one ticket for many visits and keep it hidden away where no one can see it.  What fun is that?

Ever since Bunny Bertram charged $1 a day for use of that first rope tow in Woodstock, lift tickets have been a part of the skiing experience.  Through the years ski areas have tried to improve the ticket systems to provide ease of use and security.

In 1963 Killington was the first to introduce the “ticket wicket” as a way to prevent ticket sharing.  The wicket was invented by Killington employee Martin S. “Charlie” Hanley whose wife Jane came up with the name!

The wicket discouraged sharing, but it did encourage Ticket Turkeys.  Getting a ticket wicket off required a wire cutter so it was easier to just add a new one.  Apparently the more tickets collected, the more attached to them the Ticket Turkey became.  I recall borrowing a wire cutter from the Mansfield ticket window to cut off my old ticket.  After I was done I noticed a fellow nearby struggling to add yet one more wicket to a bristling quiver of old tickets.  I offered him the wire cutters.  The look he gave me was the same as if I’d suggested sacrificing one of his children!  I returned the wire cutters to the ticket window.

Over the years lift tickets and wickets have presented challenges to both skiers and ski areas.

For skiers there’s the question of where to attach the ticket wicket.  In the “Ski like Stein” era you attached them to your sweater just in case it was one of those three days a season that you could peel off your parka and ski in just a sweater.  Never mind that it was twenty below when you bought the ticket, it just might warm up.  Even attaching them to your parka required a decision: the main pull zipper, one of the pocket zippers, or (heaven forbid) the little loop many parkas include just for that purpose? 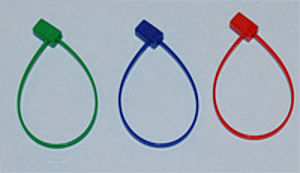 As mentioned, removing the ticket wicket was also a challenge.  Even when zip-ties replaced the metal wicket this problem remained.  The zip-ties made it easier to remove the ticket, but the zip-tie remained.  I still see quite a few skiers with a collection of ticket-less zip-ties hooked to their parka.

For ski areas there was the problem of checking tickets.  Historically this was a manual process performed by lift personnel.  But as the number of skiers increased, staff had to be added expressly to check tickets.  Part of this need was also driven by the fact that as ticket prices went up there was more incentive for customers to rip-off the system.

I’m sure ticket checkers loved seeing Ticket Turkeys in line forcing the checker to parse through a collection of tickets to find the current one.

Now RFID systems like the one we have in Stowe or other similar technologies are changing the concept of a lift ticket.  It’s very possible that ticket wickets and the traditional attached lift ticket will become part of our RetroSki memories like long thongs and Cubco bindings.