Squaw Valley opened in 1949 making it the oldest major ski area in the Lake Tahoe region.  But this won’t be an article about the history of Squaw Valley.  In my memory Squaw Valley will be forever linked to the 1960 Winter Olympics for three main reasons: TV, Penny Pitou, and the U.S. Hockey Team.

usehold got its first TV set in 1958 so the 1960 Olympics would be our first chance to watch Olympic action.  The 1960 Winter Olympics were the first Olympics to have real-time TV coverage and the first time the International Olympic Committee (IOC) controlled the broadcast rights for the Olympics.  The U.S. TV rights were sold to CBS for $50,000.  Just our luck since the CBS signal was weak at our rural New Hampshire home.  This meant that we watched those Winter Olympics in a perpetual black-and-white snowstorm, but it was still better than nothing.  By the way, Sepp Ruschp was instrumental in setting up that first TV deal from his position on the Olympic Committee.  Today TV rights bring billions of dollars to the IOC. 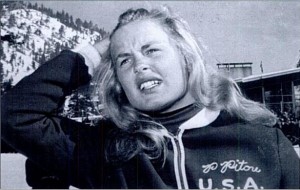 Penny Pitou was the main reason we all wanted to watch the Olympics on TV.  She was from nearby Center Harbor and there was a lot of New Hampshire pride in her racing success.  She was a medal contender in all three alpine events and many New Hampshire-ites felt she could win three golds!  She did win two medals, both silver: one in downhill and the other in GS.  That still made her the only multiple medal winner in the alpine skiing events.  Plus she came home with a husband!  She would marry Austrian ski racer Egon Zimmerman and they would run the ski school at the Gunstock ski area.

Even though my initial interest was driven by Penny and alpine skiing, the U.S. Hockey Team stole the show.

To set the scene, the Cold War was in full swing and the U.S. was in competition with Russia.  Whether it was in space or sports, the U.S. was being challenged.  In terms of medal count, Russia would dominate the Squaw Valley Olympics with 21 total including 7 golds.  The U.S. was second with 10 total medals, 3 of them gold. 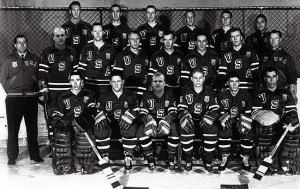 favorites in hockey at the 1960 Olympics were the Russians, Canadians, Czechs, and Swedes.  The Russian team was already drawing criticism from Canada for using the equivalent of professional players.  Even though the U.S. had won silver at the 1956 Olympics, they weren’t considered contenders.  Similar to 1980 the U.S. team was a collection of college and amateur players.  However unlike 1980 they hadn’t played together in International competition for a year much less be driven to succeed by Herb Brooks.  Actually Herb Brooks was cut from the 1960 team just before the Olympics began!

The U.S. began with an upset win over Czechoslovakia.  In the championship round they would beat Sweden and then Canada 2-1 with U.S. goalie Jack McCartan making 39 saves.  In the semifinals the U.S. beat Russia for the first time ever.  Then the finals featured a rematch with Czechoslovakia.  A close game was broken open by a 6 goal U.S. outburst in the third period – the U.S. had its first gold medal in hockey!  The 1960 hockey victory is now called the “Forgotten Miracle.”

Much like the 1980 Olympics, the 1960 TV hockey audience grew with each U.S. win.  While I may have been drawn to the Olympics by the skiing, it quickly became the hockey that I wanted to see. There was no organized hockey for us kids, but we all wanted to be U.S. hockey players.

What Vermonter won the slalom silver in 1960?  That would be Betsy Snite.  Lyndall Heyer was quick with the correct answer to last week’s trivia.  Betsy Snite also just missed a medal in the GS finishing fourth.  After retiring from competitive skiing she married Bill Riley of Stowe and ran Betsy Snite Sports here in Stowe.