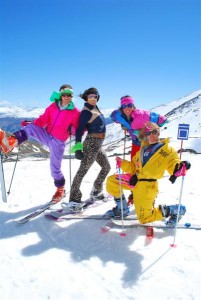 A RetroSki tip-of-the-hat to the “Waterbury Moms” who had an 80’s retro-skiwear day last Friday at Stowe.  There was a lot of neon and there were a lot of one-piece ski suits.  Most of the moms looked too young to have actually worn that stuff in the 80’s so maybe they borrowed from their moms.  I shared with them that I had thrown out the last of my 80’s outfits in my last purge.  Too bad was their answer since those outfits are worth something now.  That figures.  I have a propensity for throwing out the things I should have kept and keeping stuff that I should have thrown out.  What I didn’t share with the moms was that one reason I threw out the outfits was that I no longer fit in them!  They were just another reminder of the broadening, I mean aging process.

Well, back to the topic of ski poles.  Last week we talked about aluminum poles and the Crooked Stick tribe.  This week we’ll talk about composite ski poles.  Composite is sort of an unclear label since the word simply means something made out of two or more substances.  In the case of ski poles it usually means a combination of carbon fibers and fiberglass.  The ratio varies depending on the brand and model from as much as 90% carbon down to 60% carbon.  The result is a substance which has six times the strength-to-weight ratio of aluminum.  Plus it offers more shock absorption than aluminum.

So who invented the composite pole?  Jen Campbell correctly answered that Dave Goode gets credit for the invention. 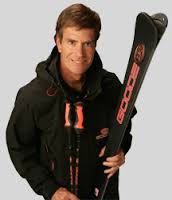 Dave Goode started a company called GOODE Ski Technologies in 1975.   “Ski” in that company name meant both snow skis and water skis since Dave Goode was and still is a competitive water skier who also snow skis.

In 1990 Goode introduced the first composite ski pole.  In addition to the composite advantages Goode incorporated an adjustable grip that allowed the user to shorten or lengthen the pole a few inches.

The Goode company is still one of the big names in ski poles.  In 1994 they introduced an all carbon fiber water ski.  They bought the Volant ski company in 2001 and began to make alpine skis.  Goode now manufacture a whole line of carbon fiber water and snow skis.

Goode moved his company to Ogden, Utah in 2004.  Ogden was so glad to have Dave Goode and his company that they renamed the local lake the “Goode Ski Lake”.  In an interesting turn the company has brought all its manufacturing back from China to the Ogden site. 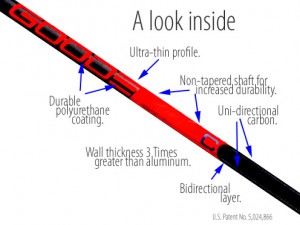 So which pole should you buy, aluminum or composite?  I found an interesting comparison chart on that well known skiing website: eBay!  They compared the poles in weight, strength, conductivity, price, shock absorption, and theft.  Conductivity refers to how they conduct cold temperatures.  So eBay claims that since aluminum conducts cold more than composites your hands get colder faster.  Hmmm?  I would think the grip might neutralize some of that effect?

Anyway, to simplify the comparison: if price is your criteria, you can get aluminum poles a lot cheaper than composites.  If you want to avoid becoming a member of the Crooked Stick tribe, composites are the choice (although you can break them!)  If you’re a bump skier, composites have a lot more shock absorption.  On this latter point, I used to have aluminum poles and at least once a season I’d make a pole plant in the bumps that would jam my wrist.  While I don’t ski bumps as aggressively as I once did, I do notice the better shock absorption my composites provide.