“Keeping Skiing Real Since 1936” That’s the slogan on the ski area’s website. No, it’s not Stowe, but another Vermont ski area celebrating 80 years of continuous lift-served skiing this season. Northeast Slopes in East Corinth, Vermont, installed not just one, but two rope tows for the 1936-37 season.

By keeping it “real”, Northeast Slopes means that those two rope tows are still there! I’m sure they’ve gone through various upgrades over the years, but they still provide a substantial portion of the area’s uphill capacity. Northeast did “modernize” in 2009 with the addition of a T-Bar.

Sue and Greg Dirmaier were quick to identify Northeast Slopes as the longest continuously operating area with rope tows in the United States.

Greg also provided a great picture of that first Mansfield rope tow when it was operating on the Glenn Skiff farm in Jeffersonville. The picture clearly shows someone riding it, so despite Wesley Pope’s claim of not making a nickel in the 1935-36 season, the rope tow did operate in the Jeffersonville location.

I also received an interesting piece of trivia on top of my trivia from Parker Riehle, President of Ski Vermont. The structure now housing the base of the beginner rope tow at Northeast Slopes was originally built as the covered bridge for the movie Beetlejuice! 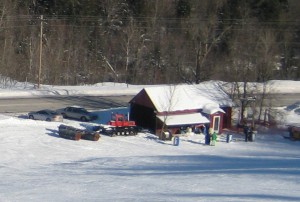 You may remember that much of the 1988 movie was shot in the East Corinth area. The movie crew constructed a building to turn a very conventional bridge into a covered bridge. (The bridge plays an integral part in the plot as the young couple swerve to avoid a dog, destroying the bridge and turning them into ghosts!) Apparently after filming, the building was recycled into the lift shack for the rope tow at Northeast Slopes.

Northeast Slopes originated with the Bradford Winter Sports Club which had decided to build a rope tow in 1936. They had targeted a location close to Bradford, but club president George Eaton was driving up Route 25 to Montpelier when he noticed a field in East Corinth that had a lot more snow than the planned location. The field was part of the Eastman Farm and the club was able to strike a deal with the Eastmans for the location of the rope tow.

The Bradford Winter Sports Club actually built two rope tows for that first season: a 1300 foot long main tow plus a shorter beginner tow. The area opened in December 1936. It initially was known as Wes Blake’s Ski Tow since he was the person hired to operate the area.

Starting with the 1961-62 season, operation of the area would change to a corporation, Northeast Ski Slopes Inc., with the corresponding change in the area’s name.

In the 1980s Northeast Slopes, Inc, was formed as a non-profit organization. They purchased the Eastman Farm land and the ski area. They took over operation of Northeast Slopes for the 1986-87 season and have run it ever since as a volunteer-based operation. Today the area is funded from skiing revenues, donations, and some tax dollars from surrounding towns.

In 2004 Northeast Slopes began fundraising to fulfill a dream that had begun in 1972 – to add a T-Bar to the slope. On December 26, 2009, the John A. Pierson, Jr., T-Bar began operation. Pierson had volunteered at Northeast Slopes for 50 years and he had been a driving force behind the T-Bar. Sadly, he did not live to see its completion. 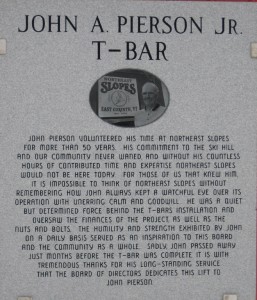 Northeast Slopes opened this past Monday for its 80th season of skiing and riding. It holds true to its slogan of “keeping skiing real” with a $15 day ticket. A family season pass is $315. They offer ski lessons for all levels and the website says “Please check in with the kitchen staff to sign up!” Oh, and they remind potential visitors that if you plan to ride the rope tows, leather work-gloves are recommended. They have leather gloves available for $8 a pair in case you forget yours or you wear out that $80 pair of modern ski gloves!