This week’s topic for my column has been on my list almost since I started writing eight years ago.  Cowardice and perhaps some hint of good taste have kept me from writing about it sooner.

So what prompted me to write it now? Well, a couple weeks back Boston’s KISS 108 FM was at Smuggs and one of their advertised events was a “Frozen T-Shirt Contest.” I guess I’ve been out-of-touch because this was new to me so I had to look it up online.  It involves soaking T-shirts, rolling them up, freezing them, and the contest is to see who can put one on first. In checking videos, there were guys as well as girls competing.

Guys competing? Putting on a T-shirt rather than taking it off? Oh, how times have changed!

The year was 1971. Freestyle skiing was in its infancy. K2 was a new ski company and had hung their hat on freestyle. They assembled an amazing demo team that included Bob Burns, Wayne Wong, and almost every big name in early freestyle. K2 hired ski filmmaker Dick Barrymore to follow the team around the United States and capture the excitement of freestyle. The result of this would be an extremely popular ski movie called “The Performers.”

As it turned out, there was a ringer among the stewardesses who was a professional stripper. She raised the ante in the competition by doing what she did best. The amateurs resorted to soaking their T-shirts to, uh, even the playing field? The wet T-shirt contest was born!

Long-time friend Pat Ostrowski had the correct trivia answer all the way from Saint Augustine, Florida! He remembers seeing “The Performers” and the scene with a wet T-shirt contest.

Back to 1971. Guess where the next stop for the K2 demo team was? That’s right, it was right here in Stowe! Barrymore talked Gar Anderson at the Rusty Nail into hosting the second K2 Wet T-Shirt Contest. The way Barrymore tells the story, word spread around town and not everyone was excited about the prospect. The select board eventually approved it, but there could be no nudity. To enforce that, a deputy sheriff would be there “with express order s to arrest Barrymore” if things got out-of-hand.

Things didn’t get out-of-hand although one contestant “accidently” dropped her T-shirt. Hey, accidents happen! So Barrymore escaped Stowe without a criminal record. 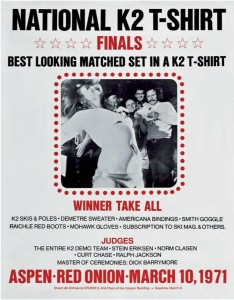 The wet T-shirt contests followed the K2 demo team on their tour and culminated in the K2 T-Shirt Finals held at the Red Onion in Aspen on March 10, 1971 (see poster.)  In addition to the demo team, the judges even included Stein Eriksen. The event overflowed the Red Onion and Barrymore had to sneak in the back to get in! Playboy was there and would later publish an article that popularized wet T-shirt contests beyond the skiing world. My understanding is that they are still a staple of spring break beach gatherings.

Going back to Smuggs, their T-shirt contests weren’t always frozen. Back in the 1970s before Smuggs earned its reputation as a “family” resort, they used to offer college groups big discounts in early January. I was living in Smugglers Village in January 1976 when a couple of busloads of out-of-state students arrived. Now the resort didn’t really plan a lot of events specifically for these students, but college students are pretty good at creating their own entertainment. And part of that entertainment turned out to be a wet T-shirt contest. Apparently the resort did have some experience with this in the past, since they made sure the event was in the evening at the Madonna base lodge bar, not in the village. The winner came out with her wet T-shirt……in her hand!