The first time I skied Jay Peak was in January 1969. Someone at work had discovered that Jay offered discounts for groups of 10 or more. So we were able to gather a group of about 15 people who headed up to Jay on a Saturday in early January.

As I remember the discount was a dollar off the day ticket price. Now before you guffaw at that amount, let me review the economics of that era. Most ski areas in New England had day ticket prices between $6 and $8 (I think Jay was $8.). As a young professional I was making about $10,000 a year or roughly $200 a week so a weekend of skiing amounted to about 10% of my weekly take-home pay. According to Payscale.com, today’s engineers’ starting salaries are around $70,000, or seven times my starting salary in 1968. Day lift tickets have gone up by a factor of 16!

The exception to the $6-$8 lift ticket in 1968-69 was Stowe which was charging $10 a day. Who did they think they were! When we get to March I’ll be writing about my first time skiing Stowe. I had to be talked into skiing a place that charged $10 a day! 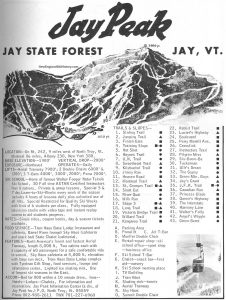 Back to Jay Peak: On that first visit I wasn’t too impressed with Jay, but that was because we started at the Tram area. A Tram is certainly a “featured” lift so it made sense to park there and start our day there. However trams aren’t the most efficient lift for uphill capacity. There was a long liftline that moved forward in bursts. Chair lift lines usually have a steady forward pace that gives you a sense of progress, but in tram lines you stand in one spot for long periods of time. When you did get to the top there seemed to be only two trail options. Granted those two options led to other trails, but still it seemed somehow limited. Also the only other obvious lifts from the Tram base didn’t go much of anywhere.

I wasn’t a student of ski area history back then or I would have known that the Tram was a relatively new addition to Jay Peak. It was built in the 1966-67 season thanks to a large investment by timber giant Weyerhaeuser Co. who eventually would take over the area. So I was there in only its second full season. Over the years since then, Jay has built-up the Tram base area and redesigned the lift structure to reduce the Tram effect.

Eventually I would learn what the locals still know: the Stateside area is the best place to use as your base of operation. In those days it put you closer to the Jet T-Bar which fed some of the more interesting trails. And no, they didn’t call it “Jet” as a tongue-in-cheek spoof. It was considered fast at the time it was installed. While the lines could get long for the T-Bar, you felt the wait was worth it. The Kitzbuhel trail is still one of my favorites anywhere. 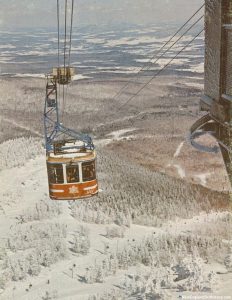 I may have been disappointed by my initial skiing experience from the Jay Peak Tram, but I was very impressed with the après ski offerings in the Tram Haus! There was a German style beer hall complete with an oompah band. There was also a lounge that offered a quieter atmosphere better for conversation. And then in the basement was a full-blown discotheque complete with light show. I was going to say it was the kind of club you’d find in New York City, but Montreal would be a more accurate choice. English did not seem to be the prevailing language. However the volume of the music meant that verbal communication was limited anyway.

Other than ski areas where I’ve had a season pass (Stowe, Sugarbush), Jay Peak is probably my most visited Vermont area. Jay Peak was way ahead of its time in opening up their woods which made it a far more interesting place to ski. When the snow is good, the Valhalla glades are fantastic and only accessible from the Tram!