Earlier this season I was writing an article for Vermont Ski and Ride magazine on the Vermont ties to the original 10th Mountain Division. In researching the Vermonters who served in the 10th, I came across a picture I had seen before. It was a picture of a skier circa 1940s on the deck of the Octagon waxing his skis. But I never knew who the person was until my 10th Mountain research. 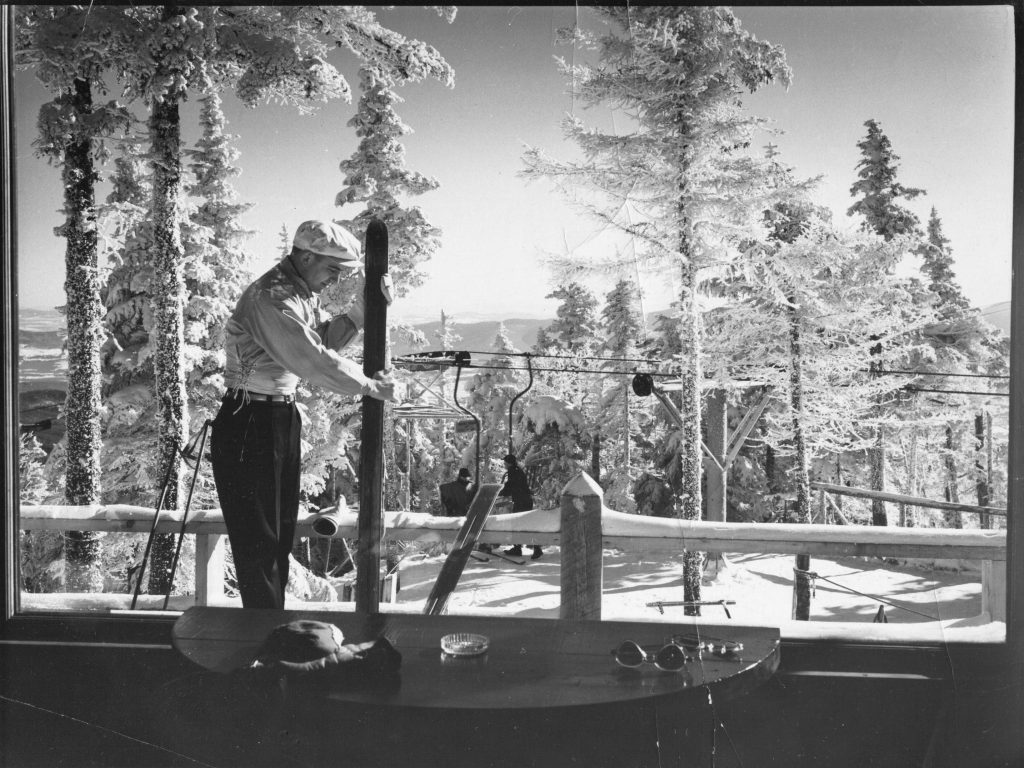 Everett C. Bailey was born in 1917 in Wells River, Vermont. He began skiing at the age of six on a pair of barrel staves! In 1928 the family moved to Burlington and Everett would graduate from Burlington High School. He went on to graduate from UVM where he co-captained the ski team. During his college years he joined the Sepp Ruschp Ski School in Stowe and became a certified ski instructor.

As a ROTC graduate, Bailey was called to active duty in the Army after the Japanese attack on Pearl Harbor. Thanks to his skiing credentials, Bailey was transferred to the 10th Mountain Division and became a Company commander. As an officer he looked out for his fellow Vermonters. During training he discovered that Clem Curtis of Stowe, who had been a ski instructor with Bailey, had been assigned to the snowshoe outfit. Bailey asked Clem why he was snowshoeing and Clem’s response was “this is where they put me!” Bailey quickly got Clem reassigned to Bailey’s skiing company.

The 10th Mountain Division is best known for its service in the Italian campaign. The Battle of Torbole in Italy was the last battle in the European theater of WWII. Bailey’s Company was part of the Battalion that successfully took Torbole from the Germans. The Battalion commander had received a minor injury in that action so Bailey became the acting commander just in time for the German counterattack. Bailey’s grandson Skyler Bailey is a historian who has chronicled the battle in his work “Reconstructing the Battle of Torbole: A Neglected Episode in the History of the 10th Mountain Division in World War Two.” Bailey’s Company and Battalion were in danger of being cut-off and overrun by the Germans. Bailey called for more support for the Battalion, but he was at headquarters rather than with his troops.  Bailey then worked his way through the battle to be back with his men as they fended off the counterattack and held Torbole. Bailey received the Silver Star for his actions at the Battle of Torbole.

The news that the counterattack had failed traveled through the German ranks quickly and they fled through the alpine passes into Austria. When the 10th entered the village of Arco they found the Germans had left behind prisoners including two local girls who were scheduled to be executed for delivering unrationed bread to townspeople. In the 1990s Everett Bailey gave a talk on the Italian campaign at the Army Mountain Warfare School in Jericho, Vermont. One of the officers listening to his talk told the story of recently being in Italy training with the Alpini, the Italian mountain troops. One of the Alpini invited the officer to have dinner with his extended family in Arco. At the dinner, the matriarch of the family gave a long emotional speech in Italian. She had been one of the two girls liberated by the 10th Mountain Division in WWII.

Everett Bailey returned to Burlington after WWII. One of his first jobs was selling ski wax and paint for Fritz Wiessner. In 1950 he began a 30 year career with E.B. & A.C. Whiting Company where he would become President and CEO. He also stayed involved with the US Army Reserves rising to the rank of Colonel. Bailey died in 2014 at the age of 96. He was truly a member of the “Greatest Generation!”