If we compare the skiing experience from the RetroSki days to today, one of the big differences is the amount of technology we see on the slopes. Tickets are scanned, runs are tracked, and then there are the ubiquitous cell phones. However there is one aspect that remains a throwback to the old days: the trail map!

While you can find trail maps on the phone, people seem to still to prefer the paper version. You’ll see people along the trails with their maps out planning their route. When I was a Host at the mountain that was a trigger to go over and ask if they needed help. Riding up the gondola or occasionally on a chairlift, people pull out their trail map and study it.

I have to admit I am a fan of trail maps. However, rarely will you see me on the slope pull out a trail map, even if I’m not familiar with the area I’m skiing.  I do my studying of trail maps in advance, particularly for a new area. I also love to study them in the off-season. They can bring back great memories or build great anticipation for new areas to ski! 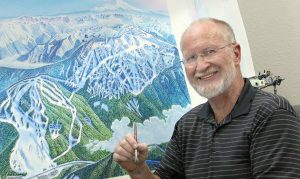 James Niehues was an unemployed graphic designer in the mid-1980s. He met Bill Brown who at that time was the most prominent trail map painter in the United States. Brown gave him some maps to touch up and a relationship developed. When Brown decided to retire, he routed a job to Niehues for a trail map of Winter Park’s Mary Jane in Colorado. Once Niehues completed that job, he sent copies of his work to the marketing managers of every major ski resort in the United States. The first to retain his services was Vail!

In his career Niehues has painted trail maps for almost all the major resorts in the U.S. as well as many in other countries. In Vermont that includes Stowe, Smugglers Notch, Jay, Killington, Okemo and Stratton. In total he provided maps for almost 200 ski areas.

The process he goes through is to first take aerial photos of the area from either a plane or helicopter. He then sketches a black-and-white version based on the photographs. In his sketch he tries to capture the light “at the time of day when the shadows are just catching the snow.” Niehues does not strive for perfect accuracy, but “interprets” the mountain, ideally from the skier’s perspective. He paints using watercolors with particular attention to the trees. He distinguishes between conifer and deciduous since he knows skiers care about that difference. For the conifers, those at higher elevations are blue while those at lower are green reflecting the difference in oxygen levels.

Tom Hubbs, David Carter, and Gary Tomlinson all knew that Niehues was famous for his trail maps. Tom added that they were as much art as maps.

Barbara LaCasse also answered last week’s trivia and said that Niehues is “possibly the only map maker that still paints them with gouache water colors!” When Niehues was looking for an apprentice, Barbara actually applied for the position. She says it would be a dream job!

So is Niehues a skier? The answer is “yes”, but only a few days a year. And he admits he has created trail maps for areas he’s never skied. He sees his goal as creating a map that can be used to market the area. “You should look at a trail map and then be encouraged to go and ski the mountain.” 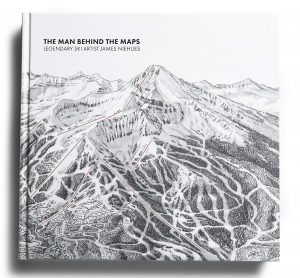 Niehues’ work has been recognized in both art circles and in the marketing business. In 2018 he started a Kickstarter project to fund a book that would both tell his story and display his work. It became the highest supported Art-Illustration project on Kickstarter attracting over 5000 donors/investors. The result is the book “James Niehues: The Man Behind the Map”, a coffee table book that would make a good addition to any Retro-Skier’s collection.

James Niehues was to be inducted into the U.S. Ski and Snowboard Hall of Fame this coming week, but due to the Covid-19 precautions that event has been postponed until September.