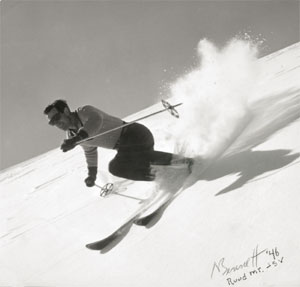 In 1965 Ted Johnson worked at the Alta Lodge overlooking the Alta ski area.  However Johnson had big dreams of starting a new ski area in the Peruvian Gulch and Gad Valley just down Little Cottonwood Canyon from Alta.  He had even purchased some of the old mining claims in that area.  Recognizing that he needed more financial backing to make his dreams a reality, he began promoting his idea.  In 1969 he met Texas oilman (and skier) Dick Bass who recognized the merit in Johnson’s ideas.  Work began in April 1970, and in December  1971 Snowbird began operation.

There is a connection, since Ted Johnson brought in Bennett to evaluate the potential for developing the Snowbird ski area.  The two hiked over from Alta and explored potential trail and lift locations.  Nelson Bennett has consulted on an estimated 50 ski areas, including Park City and Whistler.

Nelson Bennett was in Stowe a couple of weeks back.  He and his traveling companion, Madi Springer-Miller Kraus, were here visiting her local relatives Frank Springer and John Springer-Miller.  They had flown from Colorado to first attend the Hannes Schneider Meister Cup ski race in North Conway, New Hampshire.  After visiting Stowe they flew back to Colorado where they then drove up to Sun Valley, Idaho, to take part in the week-long Skiing Heritage celebration of Sun Valley’s 75th anniversary.  From there they would drive back to Nelson’s home in Yakima, Washington.  Not bad considering Nelson is now 96 years young!

Nelson grew up in Lancaster, New Hampshire, where his first skis were actually barrel staves.  He began competing in high school when that meant downhill, slalom, ski jumping, and cross country.  He went to college at UNH where he skied both competitively and for fun.  On weekends he would travel from Durham to North Conway to ski Cranmore on Saturday and stay at the University’s Outing Club cabin in Jackson for the night.  On Sunday he would hike up into Tuckerman’s Ravine for a day of skiing there and then return to Durham.

Nelson graduated from UNH in 1940 with a degree in Civil Engineering, but December of that year found him skiing for a living as a member of the Sun Valley Ski Patrol in Idaho.  One of his contributions there was the refinement of the first-aid toboggan for transporting injured skiers.

World War II intervened and Nelson became part of the famous 10th Mountain Division.  While he saw limited actual combat, he was instrumental in training the troops including two of his old New Hampshire buddies: Herbert Schneider (Hannes Schneider’ son)  and Toni Matt (of schussing the Tuckerman’s Headwall fame).

After the war he returned to Sun Valley where he would stay for 15 years, becoming director of the ski patrol and summer recreation manager for the resort.

In 1960 Nelson Bennett became general manager of the White Pass ski area in Washington state where he would stay for 25 years.  During his tenure Nelson helped mentor Phil and Steve Mahre, two of the most successful male ski racers the U.S. has produced.

Nelson Bennett was elected to the U.S. National Ski Hall of Fame in 1986.  As described earlier he still leads an active life and still skis.  And he still competes, usually winning his age category.