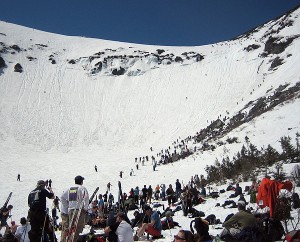 The winter of 1968-69 set a record for snowfall on Mount Washington that still stands today.  Some 566 inches fell that season and much of that snow was deposited in Tuckerman Ravine by the wind.  There was still a reasonable-sized snow field in the bowl of the ravine on July 4th and optimists were even talking glacier.

Two of my UNH fraternity brothers, Mike Weisel and Glen Findholt, had contacted me excited at the opportunity to say they had skied Tuckerman Ravine on the Fourth of July.  So July 4th, 1969, found the three of us hiking into the Ravine with our packs and skis.  By the way, both Mike and Glen now live in Underhill.

Tuckerman Ravine was “extreme skiing” before the term was invented.  Since the early 1900’s skiers have tested themselves with the Ravine’s steepness and high alpine conditions.

Many of the steep routes are “no-fall” zones where a fall would result in injury or even possibly death.  In the winter Tuckerman’s is one of the few places in the Northeast where avalanches have to be taken seriously.  In the Spring, when the largest number of skiers are in the Ravine, ice falls are a threat

Back to 1969:  Mike, Glen, and I reached the top of the snow field at the same time as a family of hikers: a dad, mom, and two boys probably 10 and 12 years old.  While we were getting ready for our first run, the older of the boys wandered out onto the snow field.   He slipped, fell, and began sliding down the steep snow field on his butt.  He was actually having a great time until he and all of us realized that he was picking up speed and running out of snow!

He bounced and tumbled through the rocks and scrub brush like a doll thrown from a car window.  The father ran out onto the snow and also fell, sliding down the snow into the rocks and brush.  We were able to restrain the mother and brother to keep them from suffering the same fate.

Mike and I skied down to check on the accident victims while Glen led the mother and brother around the snow field.

The volunteer ski patrol in the ravine was already attending to the injured boy and on their way to the father when we got there.  We became part of the volunteer rescue teams that would hand carry the litters down over the Little Headwall to the shelter.  From there a treaded vehicle would transport the injured down to Pinkham Notch where an ambulance would take them to the nearest hospital.

Miraculously the boy had a broken wrist but no other serious injuries.  He chatted with his rescuers as they carried him down.

The father’s injuries were more serious and there were fears of a punctured lung and spinal injury.

After carrying the litters to where the vehicle would take over, we hiked back up to where we had left our ski equipment and then hiked all the way back down to Pinkham Notch.  Our 4th of July skiing consisted of one run and Glen didn’t even get that!

So now the answers to last week’s trivia questions:  The Tuckerman Ravine shelter affectionately known as “Howard Johnson’s” burned in the Spring of 1972. No correct answers last week, but Jen Campbell came close and gets recognition for her persistence in searching for the answer.

As for the color of Tuck’s punch, that was a trick question.  Tuck’s punch was rarely the same color two days in a row!  The lodge caretakers would make up whatever flavor (and color) they happened to have.  One day it was even black!  Well, maybe it was a dark, dark purple grape, but I didn’t try it.

There is no trivia question this week since this is the last column for the season.  If you have suggestions for columns or trivia for next ski season, please share them here.

If you have an interest in skiing history and nostalgia consider joining the International Skiing History Association (ISHA – http://www.skiinghistory.org/).  A membership includes a subscription to Skiing Heritage magazine which is filled with great RetroSki articles and pictures.

Locally we are lucky to have the Vermont Ski and Snowboard Museum here in Stowe.   May 9th the Museum will host a celebration of the 65th anniversary of the 10th Mountain Division’s World War II success.

Thank you to all who have been supportive of this column.  And, oh yes, last Saturday was my 100th day of skiing this season!