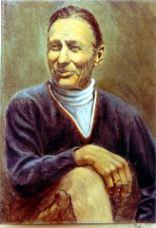 Earlier this season Stowe ski instructor Josey Furrer loaned me a copy of an article from the 1935 issue of the American Ski Annual. The article was simply titled An F.I.S. Story and was written by Roland Palmedo.

Roland Palmedo grew up in Montclair, New Jersey.  He graduated from high school in 1912 and then spent a year touring Europe.  He learned to ski in Garmisch, Germany, and fell in love with the sport.  When he returned to the United States he entered Williams College and joined their ski team.  In those days ski competitions were primarily cross country and jumping.  Slalom hadn’t been invented and downhill racing was limited (the first organized downhill race in the U.S. wouldn’t happen until 1932.)

After serving in World War I where he learned to fly an airplane, Palmedo began a career on Wall Street working for various firms including Lehman Brothers.  He still had an infatuation with downhill skiing, but there were no organized facilities in the U.S. yet. Palmedo and his skiing friends kept looking further and further north of New York City to find adequate skiing terrain.  In 1931 he founded the Amateur Ski Club of New York with the goals of promoting skiing and locating good skiing terrain.

In February 1932 Palmedo’s search brought him to Stowe to check out Mount Mansfield.  His host was Craig Burt whose son, Craig Burt Jr., acted as the ski guide for Palmedo.  Palmedo was impressed with the terrain: the Toll Road looked suitable for less skilled skiers and the logging trails offered challenge for more advanced skiers.  Palmedo returned to New York and reported what he had found.  From that time on New York Ski Club members became Stowe regulars.

In 1938 Palmedo was one of many attending the U.S. Ski Association Downhill Championship held on the Nose Dive.  Discussions revolved around skiing’s increased popularity and the fact that ski lifts were being built at other ski locales in the United States.  Palmedo saw an opportunity on Mount Mansfield.

Mike Leach correctly identified Roland Palmedo as the first president of Mount Mansfield Lift, Inc.  Mike went on to say: “In 1939, Roland Palmedo (President of the Amateur Ski Club of NY) suggested to the Mt. Mansfield Ski Club that a fun race in the spring would be a fitting way to end the ski season. On April 30, 1939, the Club held the first Sugar Slalom!”

Obviously 1939 was a better snow year than this year!

Meanwhile back to Roland Palmedo’s 1935 article.

Roland was documenting what he called “The Year We Started International Competition!”  The winter of 1934-35 was the first time the United States was represented by full teams, both men’s and women’s.  Individual Americans had raced in the European races, but no teams had ever been organized. 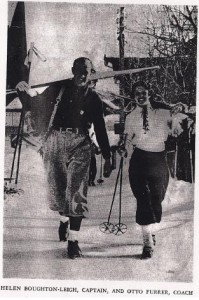 And something Palmedo didn’t mention in his article was that he had a lot to do with organizing the teams, particularly the women’s team.   Palmedo negotiated with Arnold Lunn, Ski Club of Great Britain president, to borrow an experienced member of the British National team who had dual British and U.S. citizenship.  Palmedo also helped obtain Swiss racer Otto Furrer (Josey’s uncle) as the women’s coach.

The European Championships were held in Murren, Switzerland, from February 22-25, 1935, and consisted of slalom and downhill.  In terms of results there was also a combined score.  Palmedo’s article describes the races and results in great detail.  In the combined the U.S. women’s team placed 5th led by the 7th place finish of the “borrowed” Helen Boughton-Leigh.  The U.S. men’s team placed 6th with their highest individual, Alex Bright, placing 26th.  Oh, and Josey’s uncle Otto skiing for Switzerland placed 7th in the combined against such now legendary names as Emile Allais, Friedl Pfeiffer, and Birger Ruud.

Palmedo also included some of his own very sage observations based on the competition.  While the Austrians, French, and Norwegians brought different techniques, the top skiers all demonstrated a similarity in form.  “In general skis were kept well together, vorlage was pronounced and turns were made with parallel skis,” he noted.  Vorlage refers to leaning forward at the ankles with the heels still on the skis.

Another Palmedo observation was the importance of long term training and coaching.  He attributed the success of the French and German teams to their good coaching.  Although he did say “similar preparations will probably always be impractical” in the U.S.

Palmedo also commented on the different definitions of “amateur” among the competing countries.  Ski instructors were considered amateurs by some while the U.S. and Britain saw them as professionals.  The 1936 Olympics would restrict participation by ski instructors and Palmedo saw a potential controversy.

I’ve only been able to touch the surface of Roland Palmedo’s influence on Vermont skiing, on U.S. skiing, and even international skiing.  His books on skiing and his founding of Mad River Glen will have to wait for future columns.