The first ski area I skied after moving to Vermont was Sugarbush. That was in early November 1968 and the whole mountain wasn’t open just the lower lifts. You can tell by the date I mean the original Sugarbush. It wouldn’t be until a Saturday in early March 1969 that I would return to ski the entire mountain on an eastern powder day. The storm had dropped over a foot at the top and flurries would continue throughout the day. The powder was heavy, particularly at the bottom, but skiable. The lift lines were loooong especially on the gondola, the “menage-a-trois” as some called it. But that was the only way to get to the top where the snow was a little lighter and deeper. I was skiing with a group of friends and we skied all day until they closed the lifts. It was a combination of work and wait.

Most of us were wearing the “uniform” of the era which meant a parka over a sweater over a nylon wind shirt (which didn’t breathe) over a cotton turtle neck and in-the-boot stretch pants. That meant at the end of the day we were wet either from the wet snow on the outside or the sweat from the effort on the inside. 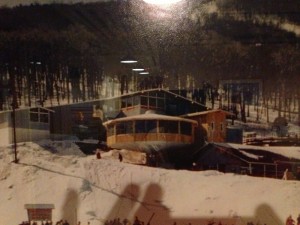 A full powder day requires a reward so even though we were a little wet we headed for the bar. When we were waiting in the gondola line we had seen this round building atop a short tower that loomed over the gondola building – sort of a smaller, shorter Space Needle. We were told that was the bar – the Mushroom bar because its structure was similar to a mushroom.

When we entered the busy bar I thought we had happened on a fashion shoot for some ski magazine. A lot of the clientele, both men and women, were in fashionable ski outfits that I hadn’t seen in the lift lines during the day. In fact I’m pretty sure many of those outfits had never been on a ski slope! There was a lot of Bogner and fur – even those big fur after-ski boots. I felt under-dressed – and wet! We got our beers and gravitated toward other customers who were dressed more functionally and more like us. 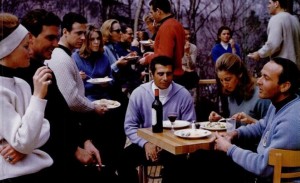 One of the guys I was skiing with filled us in on the story of how Sugarbush gained the nickname “Mascara Mountain”.  In the early 1960s an influential group of celebrities made Sugarbush the “in” place to be. From the fashion world there was Oleg Cassini who brought with him many of the world’s top models. Other celebrities included orchestra leader Skitch Henderson, New York restaurateur Armando Orsini, and members of the Kennedy clan. The jet-set followed the celebrities to Sugarbush. There was even a chartered bus called the Sugarbush Special that loaded up on Park Avenue every Friday and partied their way to Vermont. Stein Eriksen was hired to head the ski school and of course, perform his trademark flip Sundays at 1:00.

By 1969 most of the celebrities and Stein Eriksen had moved on, but what we saw in the Mushroom bar was the residual influence from that era.

These memories came back to me recently when I visited the new Slope Style exhibit at the Vermont Ski and Snowboard Museum. Looking at Sandra Heath’s Bogner collection was like walking into the Mushroom bar. OK, so the outfits at the Museum are on mannequins, but I still felt under-dressed! I highly recommend the Slope Style exhibit for triggering RetroSki memories. 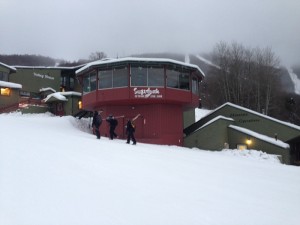 Rob Apple, Katrina Ouellette, David Clancy, and Scott Reeves all correctly identified Sugarbush as the home of the Mushroom bar. I asked Rob if he had any recollections from the Mushroom he’d like to share and his answer was “too many to recall!” David Clancy was there in the 1980s and wondered what had happened to the Mushroom bar. The Mushroom is still there, but with the new base area development it’s no longer the regular bar. As I understand it the Mushroom is used for special events such as banquets.