I moved to Vermont in 1968 and one of the few possessions I brought with me was my Barrecrafters ski rack. By the way, I did not bring any skis with me. My old Northlands with missing edge segments and no remaining camber were left in the basement of my fraternity.

In those days Barrecrafters was the big name in ski racks at least in the northeast. I’m not sure I could name another competing brand of racks. I didn’t know it at the time, but Barrecrafters was moving to Vermont at the same time I did!

In late 1967 Richard “Dick” Snelling announced that Shelburne Industries was acquiring Barrecrafters. By 1968 the move of Barrecrafters production facilities from Brooklyn, New York, to Shelburne, Vermont had begun! 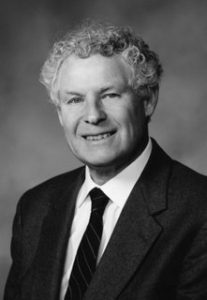 Dick Snelling founded Shelburne Industries in 1957. He acquired a collection of small manufacturing companies that primarily involved metal working. There was Husky Hardware which I believe was the world’s largest producer of those little metal hooks that you screw into the wall to hang things on. There was an automotive spring company in New Jersey and a New York company that did specialized industrial metal work. Barrecrafters fit that model since its ski racks, ski poles, and ski boot trees were metal products.

Of course besides being a successful businessman, Dick Snelling had political aspirations. He would serve as Vermont Governor from 1977-1985. In 1990 he ran again and was elected, but that term was cut short by his untimely death in 1991.

Pat Ostrowski, David Carter, and Chuck Perkins had the answer to last week’s trivia question and identified Dick Snelling as the Governor in the ski rack business. Walter Frey called in his answer of Dick Snelling.

Kim Brown shared that his father was a close friend of Dick Snelling. They had actually sailed across the Atlantic together in Snelling’s boat. Kim says, “Governor Snelling died of a heart attack while cleaning his swimming pool. My dad had just left Dick‘s house. They were very close friends and my dad was the final person to see the governor before he died.”

Barrecrafters was founded by Henry J. Barreca in 1946. A big thank you to skiing historian Seth Masia who provided me with some information on Barreca. Barreca was born in 1913 in New Jersey. It appears during WWII he was involved in manufacturing parts for radios. Out of this, he started Barreca Products Company in Brooklyn, NY. Post war he applied the design and manufacturing skills he had learned to skiing products and Barrecrafters was born. The company made ski racks, ski poles, and those metal ski boot trees that were everywhere in the era of leather ski boots. Barreca is credited with several patents covering those items and the manufacturing processes that went with them. In 1954 Barreca was chosen to head the new National Ski Equipment and Clothing Association which would become the SIA in 1959. In those days SIA stood for Skiing Industry Association, but today it’s the Snowsports Industry Association.

Barrecrafters was a very successful company. As previously mentioned, it was a leader in ski racks. Barrecrafter ski poles were an integral part of economical ski packages on both coasts. Chuck Perkins who along with Jann started the Alpine Shop in South Burlington remembers dealing with the Brooklyn Barrecrafters. To save shipping time and cost Chuck would drive to Brooklyn to pick up the racks and gear, then drive it back to South Burlington. He remembers that the economical Barrecrafter ski poles priced at $6.95 a pair were the biggest sellers at the Alpine Shop. Scott poles were the high end, more expensive alternative. Chuck says Barrecrafters used pictures of the Perkins and the Alpine Shop in their ads. Chuck still has one of those ads framed, hanging on his wall at home.

After Barrecrafters moved to Shelburne Chuck didn’t have to drive as far!

Next week I’ll continue the Barrecrafters story with what happened after the company’s move to Vermont.