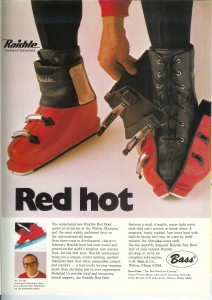 It wasn’t just color that made the Raichle different.  Like Rosemount it took a different approach to ski boot design.  First there was a laced inner boot that was kind of a cross between a boxer’s sneaker and a ballet shoe.  Theoretically you could use the inner boot to walk around in, but they tended to draw more attention than the red boot, particularly the shiny silver models.  The outer boot was a clam shell design that hinged down the middle of the sole.  You closed the outer boot around the inner and secured it with the buckles.  The outer boot was solid fiberglass approximately a quarter inch thick in the forefoot!  This solid fiberglass shell provided complete lateral rigidity without any tightness.  Forward flex was controlled by a leather cuff around the top of the boot.

I bought my first pair of Red Hots in the Spring of 1969 on sale at Wood’s Sporting Goods in downtown Burlington.  I loved them.  My skiing improved and my feet stayed warm.  The only negative was bruised shins since even the leather collar was very stiff.  There was another negative which for some probably was a positive.  They drew a lot of attention to the wearer!  Whether walking through the lodge, standing in lift line, or skiing down a trail, people noticed the boots and you!  It was impossible to be a shy introvert while wearing bright red boots!