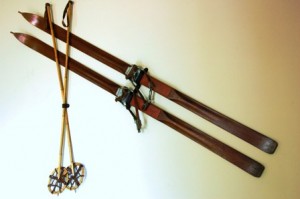 The word “ski” is derived from the old Norse word skíð which means stick of wood.  And for hundreds, maybe thousands of years, skis were just that: sticks of wood.

The Norwegians not only get credit for the word, but for many of the early advancements in wooden ski design.  In the 1850’s wood carvers in Telemark, Norway, produced the first skis with camber.  Later in the 1860’s they added side cut allowing a ski to arc along its edge rather than just slide sideways. 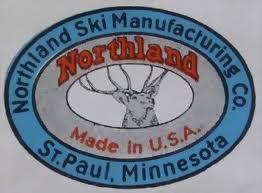 Transplanted Norwegians also played important roles in the United States ski industry.  C. A. Lund started the Northland Ski Company in 1911 making solid hickory skis of high quality.  By the 1920’s Northland had become the largest manufacturer of skis in the world.

In Seattle, Washington, Jørgen Aaland experimented with making a laminated ski, a ski made up of multiple layers of wood glued together.  Recognizing the complexity involved in manufacturing such a ski, Aaland approached Ray Anderson who was a skier and President of a furniture manufacturing company.  In 1932 Anderson joined with Ben Thompson to start the Anderson & Thompson Ski Company, later known as the A&T Ski Company.  They implemented Aaland’s ideas and began manufacturing laminated skis.  Despite the fact that the lamination approach was Aaland’s idea, the U.S. patent was issued to Ray Anderson in 1936. 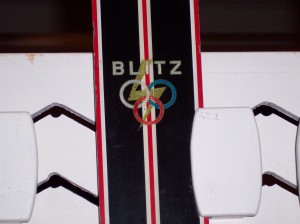 I chose to highlight these two companies because they played roles in my early skiing years.  The first pair of skis with steel edges that my parents bought me was a pair of Blitz skis made by A&T.  They had black tops with red and white trim.  The bottoms were bright yellow (this was before P-tex so it was just a painted layer).  These were affordable kid’s skis so perhaps not made to the highest standards.  Anyway I only skied on them a couple times when I fell in soft snow and snap, broke the tip off one!

Yes, it was that easy to break a wooden ski.  I figure between my cousin and me, we went through about 6 pairs of those Blitz skis during our grade school years.  They were particularly vulnerable in heavy spring conditions.  You’d fall, hear the snap, and know that a.) your parents weren’t going to be happy and b.) you wouldn’t be skiing for awhile!

This pattern of breaking skis continued for me until I was a Junior in High School.  One of our neighbors went to work at the Northland Ski factory located in Laconia, New Hampshire, and my parents got a deal on a pair of Northland Commanders.  The Commanders were entry-level adult skis with steel edges and a P-tex bottom (actually Northland called it Ko-fix, but it was the same idea.)  These skis proved to be indestructible!  In college I bought a more expensive pair of Northlands, the Combi model, and proceeded to break them, but the Commanders I could not break!  I abandoned them when I graduated from college.  By then they had no camber left and were limp noodles, but they had served me well.

Of course these ski companies do not exist today.  Both succumbed to ski technologies that relied less on wood.  However you can still see examples of A&T Blitz skis and Northland skis at the Vermont Ski Museum.

There are a number of ski brands today that began by producing wooden skis, but successfully made the transition to newer technologies.  Volkl, Rossignol, Fischer, Kneissl, and Kastle are examples.  What was your first brand of ski?