What is a gelandesprung? Both Nancy Twitty and Willie White had the correct answer. It is a jump initiated by using your ski poles, usually off some natural terrain feature. In fact I’ve always heard that gelandesprung was German for “terrain jump.”

Nancy described one variation on the jump as “the show-off’s upgrade of a kickturn!” This variation where you flip the skis 180 degrees and end up facing the other direction we always called a “Window Jump.” Check out Roman Wickart doing one of these on the cover of my book.

Nancy went on to mention seeing Rick Moulton’s documentary on Mad River which was shown on VPT. She ski-bummed there in 1953 and the movie featured many people she knew in those days. That was also when she started racing. Allen Clark got her a start in the Eastern Championships and she finished third in the downhill and sixth in the combined.

As skiing popularity grew in the 1950s and 60s, gelandesprungs got bigger and longer. In 1964 Alta’s Alf Engen organized the first gelandesprung contest. The results were decided strictly on distance, longest jump wins. In effect it was ski jumping on alpine equipment including poles. There was another difference in that the jumps usually included a kicker which Nordic ski jumps lack. 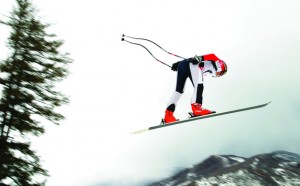 Gelandesprung competitions are still held at various ski areas. One of the largest is held at the Steamboat Springs Winter Carnival where the world record distance of 374 was set by Rolf Wilson. Locally Sugarbush has a contest every spring at Mount Ellen. The location is appropriate since before it became part of Sugarbush, Glen Ellen sponsored the gelandesprung contest. They held it on the last pitch right above the base lodge which offered a great viewing opportunity. This year’s event will be on April 1st and mark the closing weekend at Mount Ellen.

I was never much of a gelandespung-er, but peer pressure sometimes succeeded in getting me into the air. Of course in those days you had to rely on natural terrain kickers. One of my favorites was always the last mound on Whirlaway before it joins Sterling over on Spruce. Granted you had to take a running start at it from about halfway down Whirlaway, but you went through the dip and the upslope on that mound just naturally launched you. By the way, if you try that today make sure you post somebody on the Sterling side to let you know the coast is clear.

Soon people added creativity to their gelandesprungs. There were spread eagles, side-kicks, tip drops, daffies, and even helicopters. In the 1970s freestyle would take over with new terminology and much more elaborate jumps.

Today ski areas build jumps orders of magnitude bigger than anything we ever imagined. This allows the new generation to do their Cork 7’s, Rodeo 5’s, or Cab 1440’s! But remember it all started with the gelandesprung.