Have you ever skied off an actual ski jump? No, not the features that are now common in terrain parks at most ski areas, but a real ski jump. 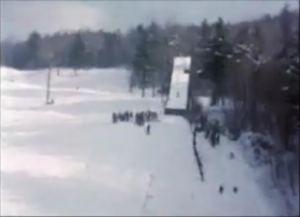 The closest ski jump to where I grew up was a small jump at the Intervale ski area. The high school ski team trained there in the era when even high school ski meets included jumping. By the time I was skiing at Intervale in 1965-66, the jump had fallen into disrepair and was no longer in use. However it was still there and boys-will-be-boys. I learned a lot about ski jumping in my one trip down that ski jump on alpine skis.

First, even on a small jump, the inrun seems a long time to let your skis run straight! Second, you really have to jump to launch yourself into the air. There is no kicker at the end of the jump. In fact, the launch point on a ski jump actually still angles down, the opposite of a kicker. Third, I learned that many jumps have a relatively flat spot before the usually steep landing slope begins. The design assumes you did jump. Since I didn’t jump, I basically dropped off the end, landing on that flat spot with a teeth-jarring impact. 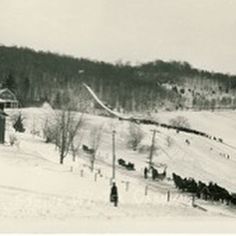 Ski jumps spread around the Northeast before the advent of alpine skiing. In 1921 Stowe hosted its first Winter Carnival and it included ski jumping on a jump built on Marshall Hill. That first Stowe Winter Carnival jumping event drew an estimated 1000 spectators. Last week I wrote about the Harris Hill jump which was built in 1922.

Another historic New England ski jump has been in the news lately. The Nansen Ski Jump in Berlin, New Hampshire, was built in 1936 by the Nansen Ski Club. The Nansen Ski Club is still active supporting a network of cross country trails near Berlin and can claim to be the oldest ski club in the United States!

In the late 1800s, Berlin, New Hampshire, was a logging and mill town. Immigrants from the Scandinavian countries were drawn to the area for jobs in the emerging wood product industries. They brought with them their traditions and their love of winter sports. In 1872 the Skiklubben Club was founded to promote Nordic skiing in the region. Initially membership was restricted to Scandinavian males, but by the turn of the century, the club opened its membership and changed its name. It was eventually renamed the Nansen Ski Club, named for Fridtjof Nansen who was the first person to ski across Greenland.

As the club evolved it built ski jumps of ever-increasing size. This culminated in the “Big Nansen” which was an 80-meter jump completed by the 1937 jumping season. Unlike the Brattleboro jump which was built into the hill, the Nansen was a steel structure sitting on top of the hill. It rose straight up 171 feet. It must have been a real workout just to climb up the stairs to the start platform. And that start platform was no place for anyone that had a fear of heights. 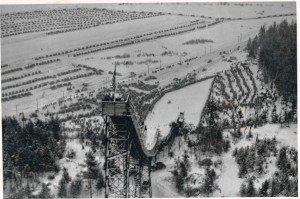 Much like Harris Hill, the Nansen jump hosted many important tournaments during jumping’s heyday. This included the 1938 Olympic trials and four U.S. National Championships, with the last in 1972. My parents took me to see a couple of those big competitions when I was a small child. I don’t have much recollection, but I do remember that it was the biggest crowd I’d ever seen. 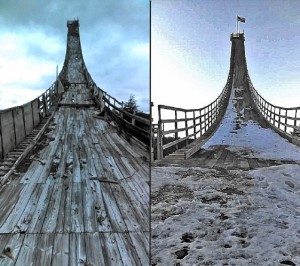 The Ramp Before and After Repair

The Nansen Jump closed in 1988, but is undergoing a temporary reprieve for a special event later this season. The State of New Hampshire and Red Bull – now there’s an interesting partnership – have financed a restoration of the jump. The special event will be an exhibition jump featuring Sarah Hendrickson. Sarah is a U.S. ski jumper who won the World Championship in 2013 at the age of 19. Injuries have limited her results since then, but she hopes to make a comeback in preparation for the 2018 Olympics. The choice of the Nansen to kick-off her comeback is a tribute to ski jumping history and her New Hampshire roots as a native of Plymouth, New Hampshire. The actual date has not been set yet.