There are two types of skiers in the world: those who put their ski boots on in the parking lot and those that put theirs on in the lodge. However there was a time when there was only one type of skier.

In the era of lace-up leather ski boots, we all put our boots on in the lodge! The process of tightly lacing a ski boot took long enough that it was not something you wanted to do in the cold. This did mean you had to schlep all your equipment to the lodge, but to help carry ski boots everyone had a ski boot tree. The ski boot tree had two purposes in the leather boots days – as mentioned it helped you carry them plus it was used to store the ski boots and keep the soles from curling. 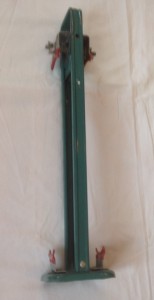 I had a Mark Fore ski boot tree with a green frame, silver clamps, and red rubber on the clamps. I’m sure many Retro-Skiers had these or at least remember seeing them. I’m sure because in the 1960s every ski area I went to, the base lodge floor was littered with them! Indeed, you were lucky if you went home with the same one you brought! Even putting your name on them didn’t guarantee you’d maintain ownership.

In 1965 Ivor Allsop invented a better mousetrap, I mean, ski boot tree. It was made out of plastic and had a spring-loaded mechanism that made it easier to put boots in the tree. He called it the Ski-Boot-In. 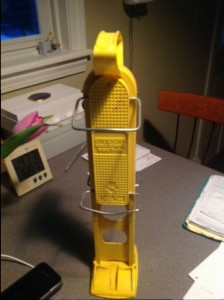 Sue Dirmaier not only knew the answer to last week’s trivia, she went immediately to their ski closet and pulled out a yellow Ski-Boot-In! She even sent me a picture.

Sue doesn’t remember when or where they got the Ski-Boot-In and is not sure either she or her husband ever used it. I have a similar story in that someone in the past gave me one and I never used it. If whoever gave me a Ski-Boot-In reads this, I apologize!

Sue’s husband, Greg, does remember using Allsop ski poles with the shock absorbers under the grips and liking them. Allsop had a series of skiing-related inventions: the Boot-In, shock absorbing ski poles, and ski bindings. As I recall their ski bindings featured an upward releasing toe which helped in backward falls. When the younger Allsops took over the company, they moved it into more consumer-electronics-based products. Today they sell printer and laptop stands.

I found a 1969 advertisement for Ski-Boot-In that listed the price at $4.95. I also found some folks on eBay trying to sell them today for $37! I should have saved my old unused Ski-Boot-In!

The advent of plastic buckle ski boots ruined the ski boot tree market and created the two types of skier I mentioned back at the beginning of this column. There are lodge skiers and parking lot skiers and either approach is fine. However the problems arise when a parking lot skier goes skiing with a lodge skier! Something has to give.

I am a parking lot skier and have been for years. The first time I realized the mismatch between parking lot and lodge skiers was 30 years ago when I was a weekend warrior skiing at Sugarbush . My wife and I had met a couple during the summer and they came to visit us that winter for a ski weekend. They were “ski instructors” from a small Pennsylvania area. Maybe I didn’t need to use those quotation marks, but ski instructors at small Pennsylvania ski areas aren’t necessarily the same as ski instructors at Stowe.

My first inkling that things were going to be different skiing with them was the size of their boot bags. My stepson who played high school hockey at that time didn’t use a bag as big! We got to Sugarbush Saturday morning a little after 8:30. They were lodge skiers, but I wasn’t going to change my stripes so I directed them toward the lodge and began putting on my boots. I was a little surprised at how long it took them to get their stuff together so by the time I had my boots on, they hadn’t made it the short distance to the lodge. Suffice it to say I waited quite a while for them to get ready before we made it to the slopes!

I won’t bore you with the rest of the weekend except for one detail. At the end of the second day, after waiting in the lodge for them to take off their boots and re-pack those gear bags, we came out to find that someone had stolen his skis!