Hannes Schneider became the director of the St. Anton ski school and turned it into the largest ski school in Europe.   Instructors who taught under Schneider were in great demand at other areas in Europe and eventually in the United States.  Being a ski instructor became a profession.

The world-wide popularity of the Arlberg technique was aided when Schneider teamed up with a German, Dr. Arnold Frank.  Together they made the first instructional ski movies featuring Schneider and the Arlberg technique.  Eventually they co-published a book that was translated into English, The Wonder of Skiing! Schneider visited the United States in 1936 demonstrating his technique at ski shows in Boston and New York.

When Hitler and the Nazis took over Austria, Hannes Schneider became a target.   The Nazis put Schneider in jail to demonstrate their control over Austria.  An American, Harvey Dow Gibson, who was President of Manufacturer’s Trust Bank and head of an international banking committee, intervened on Schneider’s behalf with the German Minister of Finance.  The economic pressure worked and Schneider was released.

Harvey Dow Gibson was originally from North Conway and had already started developing Cranmore as a ski resort. He brought Schneider to North Conway to head up the ski school. They arrived by train on February 11, 1939 to a welcoming crowd. 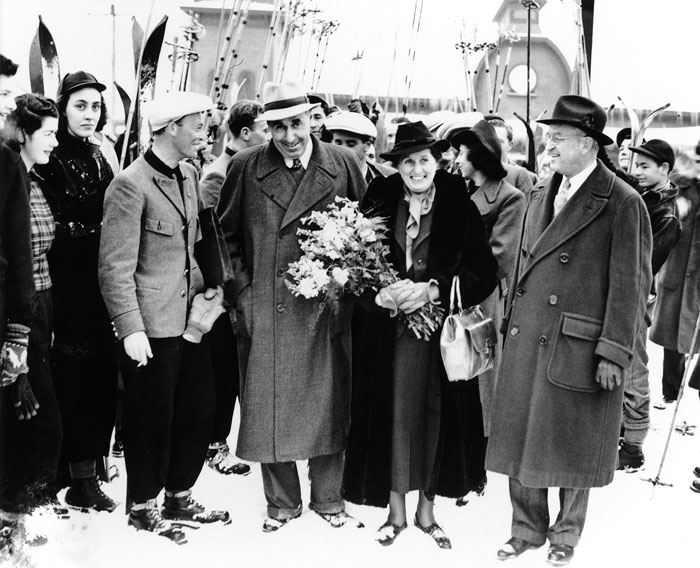 Schneider’s ski school would put Cranmore and North Conway on the ski map.  The ski school grew every year from 1939 until Schneider’s death in 1955.  Jeff Leich of the New England Ski Museum reports that the ski school gave as many as 800 lessons in one day!

Hannes Schneider earned the title of “father of modern skiing!” … at least in some circles! I should never use a trivia question based on one source without trying it out via the Internet! It turns out there are several “fathers of modern skiing!” There’s Sondre Norheim from the 1800s who the Sons of Norway consider the “father”. Chuck Perkins found that an Internet search yielded Emile Allais as the “father”. That last one makes some sense since Allais advocated a technique that skipped a lot of the Arlberg steps and introduced parallel earlier. In other words, Allais’ technique is closer to what is taught today in most ski schools.

The Schneider family remained committed to North Conway after Hannes death. His son, Herbert Schneider, took over as head of the ski school and eventually would be general manager of Cranmore. Herbert had served in the 10th Mountain Division training the troops in skiing and then being involved in combat during the Italian campaign where he won a Bronze Star. 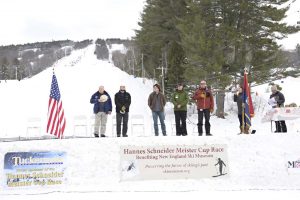 And the Schneider name and family are still revered in North Conway. This weekend the New England Ski Museum will be hosting the 23rd Hannes Schneider Meister Cup Race at Cranmore (www.meistercup.org). The race draws over 200 skiers from kids to members of the 90+ club! But there’s so much more to the weekend than that. The weekend also honors the 10th Mountain Division, particularly any of the surviving veterans of the 10th. That number shrinks every year, sad to say. The color guard for the opening ceremony on Saturday morning will be from the Army Mountain Warfare School of Jericho. There’ll be special recognition of the 80th anniversary of Hannes’ arrival in North Conway and a plaque in memory of Herbert who died in 2012 will be unveiled. Undoubtedly some of Hannes’ grandchildren and their families will be in attendance. Oh, and there’s lots to eat and drink as part of the celebration!