It was sometime in March 1967 and I was skiing at Mount Whittier in New Hampshire. I had reached the “learn-to-ski-moguls-or-die” stage in my quest to be an expert skier. I was on a mogul run and found myself going faster and faster. The inevitable happened and I fell spectacularly. Both of my bindings released as they should have and I became a flailing ball of snow and equipment.

Once I finally came to a stop, I got up and started the process of putting my skis back on. I noticed some blood in the snow and thought “Hmm? Somebody’s bleeding.” Just then a couple more drops of blood fell onto the white snow. That somebody was me!

My skis were attached to me with safety straps that kept the skis from running away, but that meant that during a fall the skis could swing wildly and flog you. One of my ski edges struck me in the head and produced about a three-quarters-of-an-inch cut in my scalp. Scalp wounds tend to bleed a lot so there I was standing on the slope with blood running down my face.

I put my skis on and hurried down to the ski patrol room at the base of the slope. I panicked the woman patroller on duty who apparently wasn’t prepared for someone dripping blood to walk through the door. She recovered quickly and cleaned me up to find the scalp cut, but now the challenge became how to put a bandage on it. She wanted to cut some of my hair, but this was the 1960s and hair was important to me. (It would still be important to me today, if I had any!) The head of the ski patrol then appeared. He assessed the situation and asked if I had a ski hat which I did. He put a gauze pad on my cut and we pulled my ski hat tightly down over it. I went back out to ski for the rest of the day.

How do you keep a ski from running away when a binding releases? For a lot of years we used some sort of retention device, a “safety strap,” that attached the ski to your leg. This led to a new set of injuries like mine, but in most cases they were less severe than a broken leg.

The simplest safety strap was just a short leather strap hooked to the binding which you clipped to your boot laces. These had a tendency to break in violent falls producing the very thing they were supposed to prevent: a runaway ski. Then there were the Arlberg straps which were a shorter version of the long-thong. These wrapped around the ski boot and then buckled. These did hold the ski more reliably, but as step-in bindings became more popular, they were inconvenient. In 1967 I had a Salomon leash which attached to the binding and clipped around your leg. 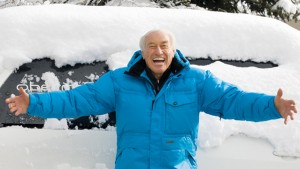 In the early 1960s rivals Earl Miller and Mitch Cubberley both introduced the first ski brakes to eliminate the need for safety straps. Theirs were single bladed brakes and didn’t catch on for a variety of reasons. It wasn’t until 1974 that Klaus Obermeyer would introduce the first two-pronged ski brake to the United States. Called the Ski Stopper, Obermeyer imported them from Italy. They had such strong springs that lighter skiers could be ejected from their bindings when unweighting! By the way, Klaus Obermeyer lives in Aspen and still skis at age 95!

Tucky Murphy was the only one to identify Obermeyer as the first to introduce the two-pronged brake.

Ski areas here in the United States were slow to accept ski brakes. There were concerns about the brakes’ effectiveness. There was also the potential for a ski to come off while riding a lift and fall on someone below. Killington defined a policy, articulated by its marketing director, Foster Chandler, that you could use ski brakes at Killington, but you needed safety straps as well. This policy was adopted by most U.S. ski areas.

I don’t remember when I got my first ski brakes. I do remember they were under the toe piece with the prongs facing forward, a bad design choice. Skiing through some of the bushes in the Birthday Bowls, one of my brakes hooked a twig basically stopping the ski. I came out of the binding and crashed into the bushes which left me uninjured, but shaken.