Day 23: Dec. 30
Bluebird day with warm temps.  This was the reward for those who were here earlier this week.  Verrrry busy!  Parking lots were overflowing.  Spent the morning on Mansfield and the afternoon at Spruce.  They closed Sterling so that was one problem solved. 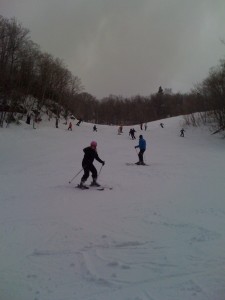 Horse Barn Pitch on Side Street

Day 22: Dec. 29
Strange weather with a freezing mist at high elevation.  Temperatures were not bad, but the wind was still a factor.  The quad had icing and electrical problems.  Spent the afternoon at Spruce which was very busy!  Lines on all lifts.  Picture at left shows skier traffic.  There were actually more people on this pitch, but by the time I got my phone out to take the picture some had already made it down past me!  By the end of the day this pitch is a real tourist trap with some ice, some bumps, some snow, and lots of people.

Day 21: Dec. 27
Wow!  A major blizzard along the coast meant little snow for us, but lots of wind!  Temperature was right around zero and the wind blowing 30-40mph.  Over Easy never ran; quad was running in the AM with Gondola on wind-hold; then in the afternoon the Gondola was running, but the quad was on wind-hold.  It was a real battle to stay warm. 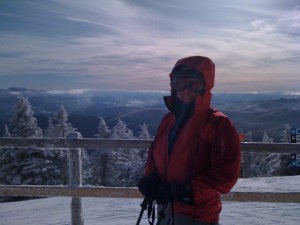 Meg at top of Quad on Christmas Eve Day

Day 20: Dec. 24
Sunny day with temps in 20’s.  Conditions are good particularly on Main Street which was very soft and skiable.  Even the Mogul Field was edgable!  Great way to spend Christmas Eve day.

Day 19: Dec. 22
We took relatively few runs since we both had errands to do.  Started at gondola which was busy!  Then switched over to Lookout since they’re still blowing on Liftline.  They are also building the medium terrain park on Lower North Slope.  It’s amazing how long it takes them to sculpt a terrain park.  Started to snow, but by the time we got home it stopped.  However apparently the snow did continue in the Burlington area and cause driving problems.

Day 18: Dec. 21
Shortest day of the year (daylight hours, that is)!  Arrived relatively early and put in a pretty full day.  Gondola was on wind-hold early so we skied the Lookout (they’re still blowing snow on Liftline which makes the quad a less comfortable ride).  Switched over to the gondola when it opened where surface conditions were great!

Day 17: Dec. 20
Colder today with an increasing wind.  Sunny down below, but clouds on the summits.  They did a nice job of grooming last night as Perry Merrill and Gondolier were in better shape  than yesterday.  They have begun blowing snow on Lift Line which is a good sign.  Good number of people there today for a Monday.  Obviously some are taking their Holiday week this week. 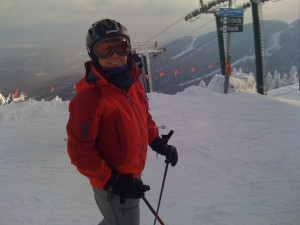 Meg at Top of Gondola

Day 16: Dec. 19
Warmer weather and a lot of sun!  Spent the afternoon on Spruce to take advantage of the sun.  Main Street was better than yesterday, but the Mogul Field is still interesting.

Day 15: Dec. 18
First day hosting this season.  I had fun.  The crowd was lighter than last week, but everyone was in a good mood.  Had Spruce in the afternoon so skiied there for the first time this season.  They were pumping snow onto Main Street with the non-racing branch open.  Conditions on Main Street could best be described as variable.  Weather was warmer with some flurries, but also some blue sky showing through.

Day 14: Dec. 17
Now this is the way it’s supposed to be!  A small dump of fluff over night made a big difference.  They claimed 4-6″, but I would have guessed 6-8″.  Gondolier was open (to the top of the race course) and it was great: new groomed snowmaking with that cover of light fluff!  Well, the thermometer at the top of the quad isn’t stuck since it read 8 degrees today.  Wind was strong near the top, but the fact the sun was out made up for it.  The first day I’ve put in a reasonable number of runs.

Day 13: Dec. 16
Still cold, but no wind to speak of.  The gondola was running so I spent my time there.  The only trail open was Perry Merrill, but at least it wasn’t Lord or Ridgeview!  Perry had a nice soft groomed surface plus there was the comfortable ride up in the gondola.  I put my custom footbeds in the new boots which snugged them up some.  I still need to play with the buckles to get the right tightness.

Day 12: Dec. 15
So now the thermometer is stuck at 0!  I liked 30 better.  I actually think it was a few degrees warmer than 0, but the wind was even stronger than yesterday so it’s a moot point.  In fact, the quad had just opened at 2:00 when I arrived due to the wind.  It was running slow and still swinging pretty good at the top.  Not many folks there although there was one bus!  They are blowing some nice snow on lower North Slope – best conditions of the year.  I’m sure that’s just to build the terrain park.

Day 11: Dec. 14
Well, the good news is the thermometer at the top of the quad isn’t stuck at 30 anymore!  The bad news is that it was reading 0 with enough wind to sway the chairs.  The mountain survived the second monsoon of the season pretty well, but still the same trails open.  The Gondola wasn’t running.  Don’t know if it was wind or the fact they were blowing snow on Gondolier.  I adjusted the cants on my new boots and saw a great improvement!

Meg with the glowing Western horizon in the background

Day 10: Dec. 11
Just went up for a couple of runs late in the day.  Mountain was still busy!  Gondola was open with just the Perry Merrill available.  It was a zoo with too many people and too many bumps!  Warm, with temps above freezing.  I tightened the new boots, but there’s still work to be done – they just don’t feel right.  I notice I may have canting and flex adjustments that may come into play.

Day 9: Dec. 10
A lot busier today!  I had to wait in a lift line!  Cold morning, below zero at home, 5 degrees at the mountain with some wind.  A lot of college kids and not just UVMers!  I rode up with a bunch from New Jersey so must be some college ski club.  On the new boots front: they feel loose.  I’m going to have to try some adjustments.  They definitely ski more straight up than the older boots.

Day 8: Dec. 9
Colder day, but little to no wind.  Good cruising as everything was groomed, but nonew terrain.  Dropped my skis and new boots off to be checked.

Day 7: Dec. 8
Light snow all day.  Temperatures were colder (15 degrees at the base), but there was little to no wind.  No new terrain open although the lower Lord which opened yesterday was a little more skiable today.  They were cracking down on poachers by pulling their passes. On a related front, my new boots are in!

Day 6: Dec. 7
12-16″ of fluff overnight brought out the hordes!  The wind was still a factor, but was blowing down the quad so they could keep it open.  That didn’t make for a fun ride however!  If you  found where the snow had blown, it was deep,light and fun!  There was a reasonable amount of poaching going on.  If you knew where the water bars and brooks are, it was pretty nice (no admission of guilt implied!)  They are opening more terrain so things are shaping up!

Day 5: Dec. 6
We returned from New Jersey today and decided to go up and take a couple of runs.  It was snowing which was great, but it was blowing so only the triple was running.  If you found where the snow had blown, the conditions were pretty nice.  A couple of runs was definitely sufficient!  It is great to see everything white and winterlike!

Day 4: Dec. 3
A dusting overnight, temperature around 30, clouds at the top, but sun was breaking through at the bottom.  It was a little busier with a good representation of college kids plus a few actual tourists.  That just made the limited terrain seem even more limited.  They have moved the terrain park from Ridgeview down to its permanent location just below the top of the triple. 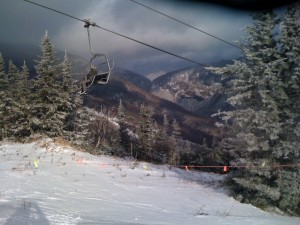 Smugglers Notch (I’m getting better with the glove)

Day 3:  Dec. 2
The mountain recovered rather well from yesterday’s rain and 103 mph wind!  Sun came out and softened the snow.  Eventually skiing just 2 trails gets a little boring – no wonder the regulars spend so much time chatting!

Day 2: Nov. 30
Grey morning with rain forecast for late in the day.  Sunrise is back open although in repairing the water they disrupted the sewer line so Octagon was closed part of the day.  Not as many people today so socializing was reduced.  Charlie (Church) made his season debut.  Standard to Crossover was opened and had a great snowmaking surface! Lower North Slope where the terrain park will eventually go was also in nice shape. 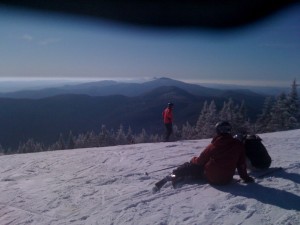 Looking South (the black cloud at the top is my glove!)

Day 1: Nov. 29
The season begins on a nice sunny day with temperatures 30 or above!  A lot of the regulars are around and everybody wants to chat!  Ridgeview and Lord from the top are open then Northslope and a piece of Standard.  Sunrise is closed due to a snowmaking water pipe break.  Centerline is open and in great shape – early season bumps, whoopee!