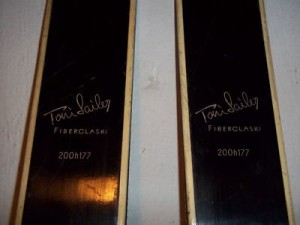 The first successful all-fiberglass ski was the Toni Sailer ski in 1959.  Art Molnar and Fred Langendorf invented and built the ski in nearby Montreal.  There had been other attempts to build all fiberglass (plastic) skis starting as early as 1952, but none had made it into production.

There were a couple of correct responders for last week’s trivia question.  I met Paul Mickelson in the gondi lift line on Saturday and he correctly identified the Sailer ski.  He is a ski history buff himself and contributed that Ernie McCulloch, legendary Canadian ski instructor, played a significant role in helping develop the Sailer ski.  Via my blog Jack Pickett also provided the correct answer and knew that Art Molnar was one of the inventors.

Pete Stangel and Ed Hackett both submitted the Kneissl White Star.  However the White Star was first available in 1960 and it was actually a wood core wrapped in fiberglass.  The Sailer had a foam core so it was truly an all-fiberglass ski.

Despite the use of his name, it’s unclear how much Toni Sailer actually had to do with the ski.  He did test the ski and in a November 21, 1960, Sports Illustrated article was quoted as saying: “It’s an ideal ski for average skiers.”

The use of Sailer’s name was a shrewd business decision.  In the 1956 Winter Olympics Toni Sailer won all three men’s alpine gold medals – a feat no one had accomplished before.  He was a charismatic, handsome athlete whose celebrity transcended his sport.

By 1959 Toni Sailer had given up pursuing gold medals for making money!  He was in films and made records.  A poll in his native Austria asking what Austrian had done the most for his country ranked Sailer 5th , just behind Mozart.  Some Austrians were surprised by this since Mozart never made anything like the money Sailer made with his records!

Sailer also partnered with businesses for the use of his name.  Such was the case for Sailer-Tex (a fabric manufacturer specializing in stretch materials) and Toni Sailer Skis.  The Sailer name gave a product instant credibility particularly in the European countries.

As mentioned, the Sailer ski was developed by Fred Langendorf and Art Molnar.  Langendorf was an engineer who specialized in fiberglass and I have not uncovered much subsequent information about him.  However Art Molnar has a long resumé in the ski and snowboard world.

Molnar fled Hungary during the 1956 Revolution and landed a job working for Langendorf in Montreal.  Molnar designed the first Sailer ski and then in 1963 designed a later model with a ribbed fiberglass core where the ribs were separated by air channels.  This latter design made the ski extremely light, but still strong.  In 1967 Molnar left Langendorf to go to work for K2 and develop a line of skis using foam cores.  Then in 1971 he moved to Lange where he helped produce the first Lange ski.

Finally in 1973 Molnar started his own ski company utilizing the ribbed fiberglass core he initiated at Sailer.  Molnar skis were light in weight with a soft flex and developed a cult following among powder skiers.  Molnar was able to keep his company afloat for ten years before having to close his factory in 1983.