“I am still skiing with my Salomon rear entry boots! Started skiing young in 1969 and after years of Nordica, Lange, Fischer (I think) and pain, my Salomons are the most comfortable boots I’ve ever had. If I could drive a car in them I would wear them all the time. As a nurse, comfortable, supportive foot wear is important. The clomping does wake some patients up, but with these I have the energy for 12+ hour shifts and a relaxing glide down the slopes after.” Debbie Webster, R.N. 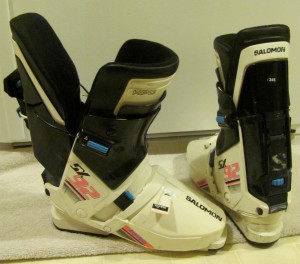 Debbie is an example of the diehard fans of rear-entry ski boots. Every year my blog receives more comments on this topic than any other! Specifically they usually involve the Salomon 7x, 8x, 9x series. They express love for their 30+ year old boots, or they mourn that their boots finally disintegrated, or they can’t believe today’s boot companies don’t offer rear-entry models.

So every Retro-Ski season I include a column on the topic of rear-entry ski boots to let these folks know they aren’t forgotten! Last season I brought hope to the devotees with the announcement by both Atomic and Nordica of new rear-entry models. I had hoped to garner some firsthand experience about these new offerings this season, but it hasn’t been the best season for new equipment thanks to COVID. Actually I think I witnessed more old equipment on the mountain this winter than new. This even included some Salomon 9x boots!

Let’s review some of the pluses and minuses of rear-entry boots. The unchallenged plus is the ease of putting them on or taking them off versus the traditional four buckle front-entry boot.  Most devotees also claim they are more comfortable once they are on your feet as well. Some also claim the rear-entry boots are warmer, but I’m not sure what in their design would lead to that. I do know that many owners of the traditional four buckle boots overtighten the bottom two buckles which can lead to cold feet.  Interesting that the new Nordica rear-entry series offer a model with built-in boot heaters which should definitely make them warmer!

The main negative critics usually bring up about rear-entry ski boots is their lack of “performance.”  However let’s review last week’s trivia question. What was unique about Marc Girardelli’s ski boots in winning his 5 overall FIS World Cups? They were rear-entry! 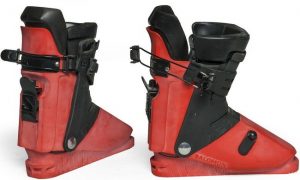 Jan Rozendaal of South Burlington had the answer. “Marc Girardelli won his medals on the rear entry Salomon S-X 90 Equipe boots. I had a pair of these bright orange beauties for over 30 years and tears streamed down my face when they finally broke.“ Jan also added that whenever  his skiing buddies mocked his choice in boots, he’d bring up Girardelli’s record as a response.

Jan also has a pair of the new Nordica HF 770 rear-entry boots, but they weren’t easy to get! He couldn’t find any at local ski shops, but his son talked him into getting them online. Due to COVID he only skied with them 4 or 5 times this season, but says, “I found them quite good.  They are very easy to get on and off and are warm and comfortable.” He does say that tightening or loosening the fit was easier on his old Salomons which had both a side and rear adjustment. The Nordica has just a rear adjustment which is not as accessible.

Jan also mentioned that rear-entry boots should be great for rentals. I couldn’t agree more. So let me get on my soapbox.

The skiing industry is interested in attracting new people to skiing. The skiing industry includes ski area operators, equipment manufacturers, ski shops, lodging, and food services. Data show us that the majority of people who try skiing go one day and that’s it for at least the season! Cost is the primary barrier for why they don’t come back, but I would put ski boots next on the list! I have personally witnessed the following scenario in the rental shops at Stowe: A “never-ever” skier enters, the rental agent measures the skier’s foot and brings out a boot of appropriate size. The new skier has difficulty getting into the boot so the agent brings the next size up. This continues until the skier is happy. Now I doubt that the potential skier will realize that the boots are way too big, but they will remember what a pain it was to get into or out of ski boots! Rear-entry boots would be so much easier and the new skier would have a boot far closer to a good fit!