The Tie That Binds

So when was the Look Nevada toepiece created?

It surprised me to find out that it was 1950!  The Look Nevada designed by Jean Beyl in Nevers, France, was way ahead of its time.

To give some perspective, the first release binding of any kind was the Saf-Ski invented by Hjalmar Hvam in 1939.  (Hvam had been motivated to design the binding after suffering a broken leg in the same race two years in a row!)  Only eleven years later Beyl introduces a binding with adjustable release tension and anti-shock capability.  Today’s toepieces are only an incremental improvement over that first Look Nevada.

For many years cable bindings were the way to affix your heel to a ski.  They even developed cable bindings with forward release capability.  However demand for more control over a ski particularly by racers in hard-packed conditions led to the development of the separate fixed heelpiece.   These firmly attached your heel to the ski and the only forward release was when the screws pulled out!  (And yes, that did happen.)  Fixed heel pieces became turntables as release toepieces became more prevalent. 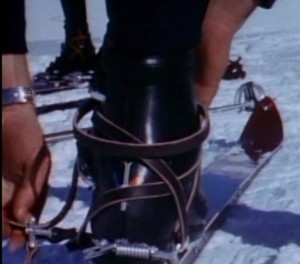 One of the most memorable components associated with turntable bindings was the long thong!  First, if you want some interesting results, enter “long thongs” into your favorite Internet search engine (only if you’re over 18!)  So let’s make certain we’re all talking about the same thing.  The long thong was a leather ski retention strap, a safety strap, that when the toe binding released kept you affixed to the heel unit and the ski.  This could have been accomplished with a strap probably 18 inches long or even less, but why settle for 18 inches when 48 inches was available!  Oh, there was another reason for this since extra wraps of leather around the upper portion of a leather ski boot improved the forward support skier’s desire.  However there were ramifications.

Over time everyone developed their own unique wrapping approach which became a routine.  If you wanted to screw up another  skier, just cut 8 inches off one of their long thongs!

Gondolas were the curse of the long thong user since you had to wrap and unwrap for every run.  More than once I opted to take a T-bar run rather than another gondola run just to avoid the wrapping process.

So the next time you click into your step-in bindings with ski brakes just remember all the fun you’re missing.