The “Shape” of Things to Come 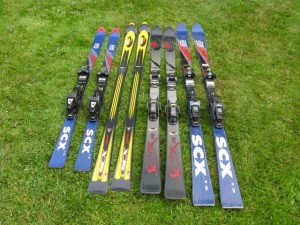 A Collection of Elan SCX's

Last Saturday I was loading my skis into the rack on one of the gondola cars and in the slot next to mine was this pair of long, skinny skis.  I thought for a minute that someone was on cross country skis.  But no, these were just an older pair of Salomon skis.  They were more than a foot longer than any other ski in the rack.  I asked the owner how long they were and he responded that they were 197’s.  That only surprised me because I would have guessed they were even longer!

It wasn’t too many years ago that a 197cm ski would not have seemed long at all.  About fifteen years ago many of us were still skiing on 200’s, 205’s, or even longer!  Now I ski on 168’s which are the shortest skis I’ve ever owned!  Even when I was a kid my skis were longer than that.  Of course my parents apparently thought I’d be six-foot-four and “grow into” those longer skis.

The change began in 1993 with the Elan SCX.  The SCX stands for “sidecut extreme” and Elan engineers Jurij Franko and Pavel Skofic designed a ski with 110mm-63mm-105mm dimensions.  That produced a ski with three times the sidecut of a competition slalom ski.

I received several correct answers to last week’s trivia question, but Eric Ball was the first to identify the Elan SCX as the initial “shaped” ski.

Shaped skis made it easier to initiate and carve turns.  Shaped skis allowed beginners to advance faster.  Intermediates could achieve carved turns which had been the domain of the elite expert.  For the advanced skier you could get the same performance in a 170cm ski that you used to experience in a 200cm ski!

For those interested in more information on ski shapes, check out “Evolution of Ski Shape” by Seth Masia at http://www.skiinghistory.org/index.php/2011/08/evolution-of-ski-shape/.

Now for some of the feedback on most memorable skis.

Mountain Operations Manager Mike Manley’s most memorable ski was the Rossignol 4S.  I just couldn’t resist the alliteration!  The teal green skis were extremely popular from their introduction in 1987 until well into the 1990s selling more than a million pairs.  Their popularity was helped by the success of Alberto Tomba in both the World Cup and Olympics.  Stowe Host Holly Rainville also picked the 4S as her most memorable ski.

Louise Thompson named the Kastle Freestyle Pros as her most memorable. “They were twin-tipped, and in the early and mid-70?s when freestyle skiing began, they were a whole lot of fun!”

Bill Kornrumpf and Walt Kangas of the Schenectady Winter Sports Club both selected their first “good” skis.  For Bill it was a pair of Head GS Comps and for Walt it was a pair of 210 Blizzards.

My choice of hart Javelins did draw some comments as well.  Tim Cross said that in 1966 when he was 10 and his family lived in Boulder, Colorado, he wanted a pair of Javelins “so bad that I could taste ‘em!”  Instead his parents bought him a pair of imitation Javelins made by Hanover, but he still skied them proudly.  Tim also reminded me that there was a red-and-black XXL Javelin model in the 1970s.

Bill “Shaky” Hays, former Mount Mansfield Ski Patroller, did not like the Javelins.  “They were horrible boards, heavy and unflexible!”  And he got them for free!  He ended up buying a pair of Kastle CPM TI Soft Slaloms from Jim Shephard. “Yes, with my own money”, Bill says.  By the way, Bill is 73 years old and now skis on a pair of 180 K2’s he bought for $1 in Alberta, Canada.

Ken Strong also skied on Javelins in his ski instructor days.  Ken says that in about the second year The Shed was open, the hart rep dropped off some “tongue-in-cheek” bumper stickers which Ken added to the rafters.