The annual Sunrise Service brings together an interesting mix of people from those primarily there for the free skiing to those who are actually there for the Easter service. For some it is an annual social celebration that includes the service and skiing followed by brunch. The attendance varies with the weather from a few hundred to well over a thousand. Good weather last year saw about 1500 in attendance. 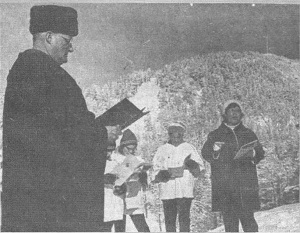 The tradition started on April 10, 1955. Reverend Douglas Brayton, who was in his first year as pastor of the Stowe Community Church, arranged the first Easter Sunrise Service with the Mountain Company. It was held atop the single chair near the Octagon. As of writing this, I received no answers to last week’s trivia.

However Douglas’ son Ben Brayton remembers the early days well. He was fourteen when that first service was held. He says his father was given 150 free tickets for people to use the single chair. The service was at 7:00AM, not synchronized with the actual sunrise as the service is now.

For the first few years the Stowe High School Band provided musical accompaniment and Ben remembers that cold Easters caused valves and reeds to freeze. Eventually an accordion played by either Jed Prouty or Bernie Stasiak took the place of the band. 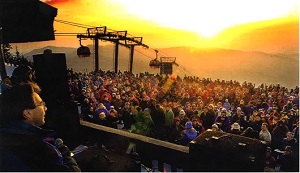 Bruce Comiskey is the fourth minister to preside over the service and his 27 year tenure is the longest. In those 27 years he only remembers a half dozen times with spectacular weather like last year’s service. Bad weather such as rain, snow or clouds can obscure the sunrise, but Bruce believes that makes attendance more meaningful – that you braved the weather to be there. There’s only been one year when the service had to be held in the base area due to wind and ice.

This Sunday will be the 60th Annual Easter Sunrise Service. The gondola will start at 4:30AM and the last car will load at 5:30AM. The service will be held outside the Cliff House starting at 5:56AM, sunrise! Following the service the gondola will be available for downloading. Weather permitting, it appears that there will be adequate snow to support skiing or riding after the service.

The end of the Stowe ski season also marks the end of the RetroSki season. A big thank you to all my readers for supporting this column. I really appreciate those who have answered trivia questions, suggested topics, or introduced yourselves to me. I look forward to returning next ski season.