Dr. Richard Spademan and His Binding 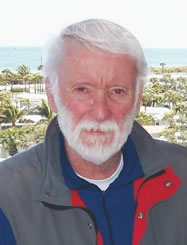 Richard Spademan grew up in Michigan and learned to ski at Boyne Mountain. He chose to pursue a medical career and graduated from the University of Michigan medical school. As an intern he designed and patented a better vascular catheter that would become widely used.

In 1962 Spademan would end up at the hospital in Truckee, California near Squaw Valley for his residency in orthopedic surgery. The 1960 Winter Olympics had made Squaw Valley a popular ski area so it attracted skiers of all abilities. That meant the Truckee hospital was very busy with skiing-related injuries particularly broken legs. Spademan realized that many of the skiers he saw with broken legs were using release bindings.

Spademan began studying the release bindings of the day. He determined that the toe pieces didn’t release in a forward twisting fall – the very fall they were supposedly designed to handle. As I mentioned in last week’s column, forward pressure on the toe could dramatically increase the force required for a release. He would also observe that binding adjustments were way too complicated and inexact. So Spademan set out to design a safer binding just as he had a better catheter.

And as it turned out Spademan would use the royalty money from his catheter patent to fund his binding project. It would be 1966 before Spademan had a prototype. He took a leave of absence from his job as an assistant professor of orthopedic surgery at Stanford University and began a tour to drum up interest in his binding. Spademan did not find much acceptance for the binding, but eventually he did convince some ski patrollers at Squaw Valley and his old home area of Boyne to try it. Their input proved extremely valuable in refining the design. 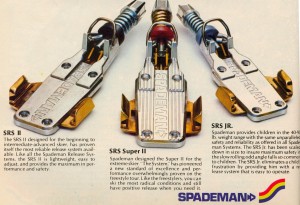 Spademan’s plan had been to turn his design over to a binding company, but there were no takers. So in 1969 Spademan went into the binding business. The Spademan binding was radical. There was no toe piece or heel piece for that matter. A small metal plate attached mid-sole of the ski boot clipped into the binding. The concept was that the plate and binding aligned with the tibial axis of the lower leg and would release in the event of an excessive twisting force. One adjustment controlled the release tension of the binding.

The binding caught on with rental shops since it shortened set-up time significantly. And it was a safe binding. Spademan rental statistics showed an injury rate of 1 fracture in 50,000 skier days versus an average 1 in 20,000 skier days for other types of rentals. 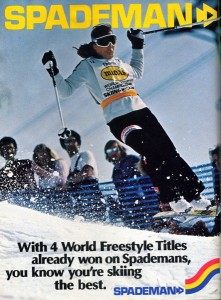 The Spademan binding also caught on with the freestyle movement in the 1970s since they were looking for a lighter binding. By 1978 Spademan was the largest selling U.S.-built binding.

Then Spademan would suffer a setback. Ski boot soles were changing and it took negotiating a standard that would assure compatibility with the Spademan binding. The standard also involved changes to the bindings. Re-tooling meant that Spademan was late getting the new bindings to market for the next season which impacted sales significantly. As more conventional bindings improved, Spademan sales continued to drop and in 1983 Spademan bindings went out of business. Dr. Richard Spademan returned to being an orthopedic surgeon and eventually became chief of orthopedics at Stanford Medical Center.