A couple years ago the company that ran the Park City ski area was a little late with a payment on the leased land that made up the majority of their skiing terrain. When they went to make the payment, they found that Vail Resorts had negotiated a new lease with the landowners. A legal feud ensued (no pun intended), but Vail prevailed (pun intended) and now owns what was the Park City ski area.

It turns out that a similar plot line 80 years ago eventually led to the founding of Suicide Six! 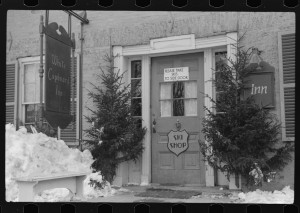 In late 1933 Wallace “Bunny” Bertram was living in Woodstock, Vermont at the White Cupboard Inn owned by Robert and Elizabeth Royce. Winter business at the Inn was primarily members of the Amateur Ski Club of New York who came to ski the nearby hills. There were no lifts so all the skiing had to be “earned” by hiking or skinning up those hills. Bunny Bertram was a ski instructor who helped coach the lesser experienced skiers.

As winter started, the Royces, some of their New York guests, and Bunny Bertram began discussing the possibility of some kind of lift that could pull skiers up the hill allowing more runs per day. They had heard about a rope tow powered by a car engine that had been built in Quebec the previous winter. The Royces obtained plans for the rope tow from the Quebec group. The Royces also had a topological expert map out the hills around Woodstock that would be appropriate for such a lift. The expert identified six hills and numbered them on the map from one to six. The Royces chose hill number two for their first ski lift which was a pasture owned by dairy farmer Clint Gilbert. 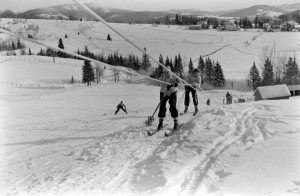 The Royces paid Gilbert $5 to lease the pasture for the season and retained local mechanic Dave Dodd to put together the first ski lift in the United States. Bunny Bertram was heavily involved in building that first lift, a 900 foot long rope tow powered by a Model T engine. The White Cupboard Skiway opened on January 18, 1934, charging $1 a day for use of the tow or fifty cents for a half day.

After a successful first season the Royces were prepared to offer Clint Gilbert $100 for the 1934-35 lease on his pasture. The story goes that they had wanted to present Gilbert with a crisp, new $100 bill, but by the time they obtained one, Bunny Bertram had already closed a lease-deal with Gilbert for $10 plus a percentage of the ski tow’s income. Bunny Bertram was in the ski business.

Bertram changed the name of the area to the Woodstock Ski Hill. He also made some changes to the original rope tow. The Model T was replaced with a more reliable electric motor provided by the Woodstock Electric Company – all Bertram had to do was pay for the electricity it used. To make the rope easier to ride, he also improved the pulley mechanism based on a Ferris wheel he had observed.

By the end of the 1934-35 season, the relationship between Bertram and Clint Gilbert had become strained. Worried that he wasn’t getting an accurate percentage of the ski business, Gilbert had attached Bertram’s bank account. Bertram decided to sever his relation with Gilbert and went looking for a new hill.

This led him to hill #6 on the topological map, only a short distance from Gilbert’s hill. Bertram would build a ski tow on the south facing side known as the Gully with the help of the Fisk family who bought the land and let Bertram use it rent-free. Bunny’s Ski Tows opened for the 1935-36 season. 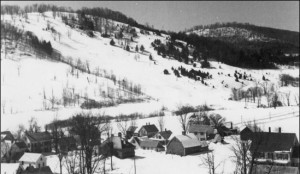 Even though the Gully is now part of Suicide Six, it wouldn’t be until 1937 that Bertram could procure the rest of hill #6. He was able to purchase the top of the hill and the land on the northeast side – the steep side. Legend has it that Bertram when looking at the steep northeast face of hill #6 had said “it would be suicide to ski straight down that face.” Later in thinking up a name for his new expanded area he recalled his comment and remembered the power of alliteration from his high school English class: hence Suicide Six!

Bob Stewart delivered the only correct answer to last week’s trivia question and he delivered it in person! Thanks, Bob.

Suicide Six begins celebrating its 80th birthday this year. The weather has delayed their opening until this past Tuesday, but they still plan a retro-themed birthday party on Saturday, January 30th. There will be prizes for the best period (any period) outfits, oldest skis, wildest ski hats, etc…