Can a ski boot with a novel new design influence other ski boot manufacturers even if that novel boot never made it to market?

Based on the story of the Kastinger Porsche, apparently the answer is “yes!”

Daniel Post was a mechanical engineer and a skier. In the late 1960s while he was teaching at RPI in Troy, New York, he’d take his entire family skiing at Jiminy Peak. All of the Post kids became accomplished skiers. In fact his twin daughters, Ellen and Marion, will be inducted into the United States Ski and Snowboard Hall of Fame this Saturday right here in Stowe!

In those late 1960s, plastic boots were taking over the market. But Daniel Post still wasn’t that happy with his ski boots, particularly the beating his shins took from the stiffer plastic boots. Being a mechanical engineer he believed extending the front of the boot higher could provide better leverage and spread the pressure over a greater area. He experimented with his own boots by extending a cuff almost up to the knee. Post was very pleased with the results on his skiing.

Post patented his idea for a “lever-type ski boot” in 1973 and started marketing the idea to ski boot companies. Lange took a one year option on the patent, but never came up with a viable design. Daniel Post further refined his idea and this time drew the interest of Herman Kastinger, head of Kastinger ski boots. 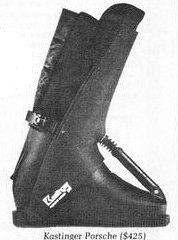 Kastinger enlisted Ferry Porsche’s design group to design the boot. Yes, that’s the same Porsche as the car! They came up with a rear entry boot that had a separate cuff which wrapped around the calf. Forward flex was controlled by a hydraulic cylinder – that’s what you get when you let a car company design a ski boot! 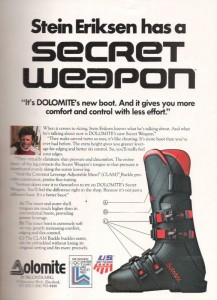 Financial problems at Kastinger slowed the production of the Kastinger Porsche ski boots. During that time several competing boot companies started developing their own “knee-high” boots. The build-up for the 1980-81 ski season saw four entries in the “knee-high” category: the Kastinger Porsche, the Nordica Polaris, the Tecnica Squadra, and the Dolomite Secret Weapon. The Nordica, Tecnica, and Dolomite were really just traditional front buckling boots with an extended high cuff. The ski magazines hyped the new boot designs and even Sports Illustrated featured an article on Daniel Post and the knee-high boot revolution he inspired.

The only problem was the Kastinger Porsche never made it to the ski shops! The Kastinger financial problems were too large, the factory closed, and the Porsches never shipped. 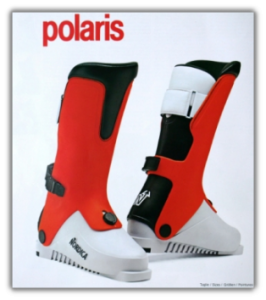 The Dolomites and Nordicas sold very well that season and inspired other brands to produce models with higher cuffs in 1981 and 1982.

So the Kastinger Porsche boot based on Daniel Post’s concept inspired a trend toward knee-high ski boots in the early 1980s. No one had the correct answer to last week’s trivia question. It was kind of an unfair question since the Kastinger Porsche never made it onto the slopes, but I know there are many RetroSkiers who remember the knee-high boots that resulted from the Porsche’s design.

The knee-high trend was short-lived. They disappeared by the 1983-84 season although all ski boots incorporated a higher profile than they had previously. There were still skiers including Daniel Post who swore by the comfort and control offered by the knee-highs.

As we know, rear entry boots eventually lost the war to more conventional front entry boots, but there is still an army of rear entry boot fans out there who won’t give up the fight! Since writing my column on rear entry boots back in December 2015, I have received more comments on that article than any other I have written. For example, on March 18th I received a comment from William who has been skiing for 54 years, the last 25 on a pair of used Salomon rear entrys. He says:

“This past year the rear plastic sole on my boot disintegrated. Rather than replace with new boots, to my wife’s horror, I made a new sole out of Maple in my wood shop. Works great. Making one for the other side now!”