The Lookout on Big Spruce

Lots of action on last week’s trivia question! The warming hut near the top of Big Spruce was called the Lookout. Bill “Shakey” Hays was one of the first to answer. 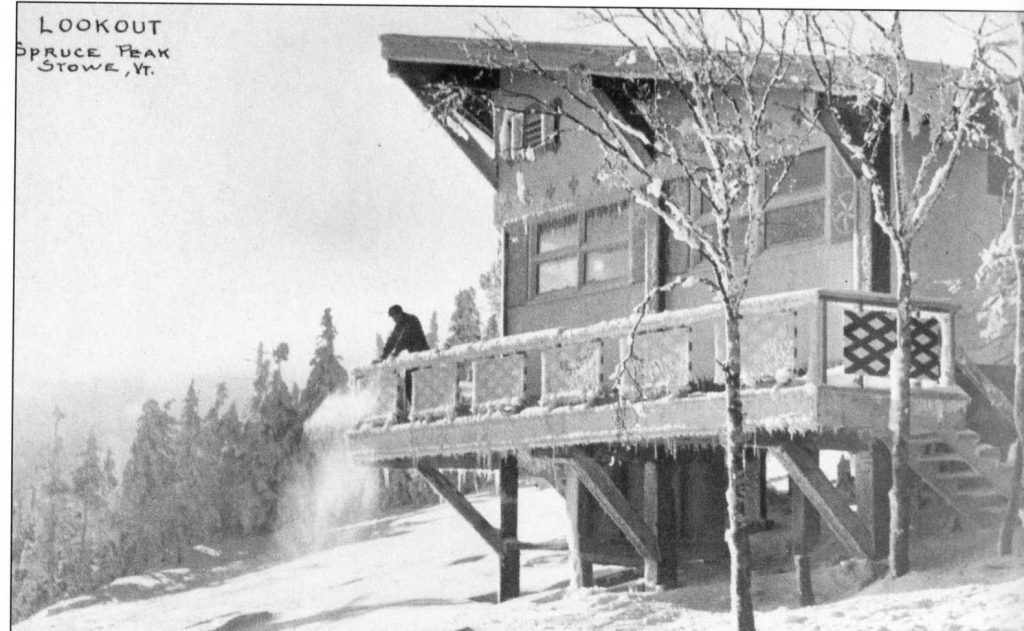 “It was variously known as “The Outlook” and “The Lookout”. Lots of neat history there, including ‘barista’ Allen Allen’s famous PB&J sandwiches, the indoor propane-fired toilet experiment (fail), the gas mantle lamps, and its adjunct “Heartbreak Hotel”, the outhouse. As Spruce Peak Patrol Leader, in the early 1970s, I even moved the Ski Patrol into the untenanted structure. Fail. Lasted two days. Needless to say, the Lift Boss, Carson Moren, was not too happy with my antics!” 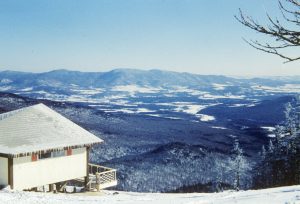 The Lookout was not at the top of the Big Spruce lift, but a short way down Main Street. I estimate that it was about where you get on Main Street when you traverse over from the Sensation lift. As you may have deduced from Bill Hay’s comment, it did not have modern connections to electricity and water! That may have been OK when it was built in the 1950s, but it doomed the Lookout from being part of a “modern” ski area. By the time I was regularly skiing Stowe, it was not staffed. You could go in, but it was falling into disrepair. Eventually it was torn down to remain only in skiers’ memories.

As I mentioned in phrasing my trivia question, Carol van Dyke gave me the idea for the question. She had shared a story related to the Lookout, but couldn’t remember its name. So she consulted with Brian Lindner who provided the name. Carol’s story was actually related to my column about the old days of safety straps. 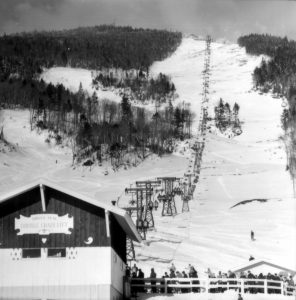 When Carol was about 12 she was training with the Mount Mansfield Ski Club junior team. She says “I was always struggling to keep up with my faster friends.”  On one of those “three blanket days,” she and her friends took a long, cold ride up the Big Spruce chair for a last run. Before the descent, they stopped in the Lookout to warm-up. Of course this meant taking their skis off. Carol’s bindings used the old red Arlberg straps. When it was time to head down, all her friends quickly got into their bindings while Carol fumbled with her Arlberg straps. As her hands got numb from the cold, the struggle to buckle them only got worse. And of course her teammates took off without her, oblivious to her struggles. She says, “I joined the howling cold wind with my own crying heaves and in amalgamation with my frozen body had an emotional breakdown.  Somehow, I eventually got it together and skied down Smugglers trail solo and lived to see the day.”

Speaking of bindings, I did also receive some responses to my question on the first step-in binding. R. Rafael had Cubcos on a pair of wooden skis when he was young. Jim Murray had a pair of Miller skis mounted with Cubco bindings! He shared that “Cubco’s were decent bindings for the time, but they were dangerous when walking on wet lodge floors because of the plates that were mounted to the boots!”

With the RetroSki season coming to an end, regular contributor Russ King weighed in on Downhill Racer. Russ skied at Sundance a few years ago. He says, “At 91 my runs are limited – just 4 runs in 2 days on the Mountain and a few more at Spruce. Hope to be there next season for my 67th season!”

In light of all that we’ve been going through, you may have lost track of the fact that this coming weekend would have been the end of scheduled skiing here at Stowe. The end of ski season for me always produces a feeling of sadness followed by a sense of anticipation for next season. This season has certainly been like no other! But it has produced what I can best describe as a longing for the next ski season, whenever that may be! I will appreciate every day on the slopes. Yes, even when the conditions are “machine groomed!” I will cherish sitting down with friends in the Octagon! And I will treasure the memories skiing has provided for me.

This wraps up another RetroSki season. Thanks to all my readers who support the column! You keep me going. Remember, we are all in this together! Stay well!