So what company was the first to offer a down parka? Tim “Griff” Griffin knew that it was Eddie Bauer!

Eddie Bauer, the person, started Eddie Bauer’s Tennis Shop in Seattle in 1920. Gradually he expanded what the shop carried and it became Eddie Bauer’s Sports Shop. The story goes that Eddie developed hypothermia on a fishing trip and decided to pursue alternatives to the wool clothing used for warmth at that time. The first down jacket was introduced in 1936 and Bauer patented the process of quilting the down which kept the jacket from being too bulky. Thanks to that process, it could be used for action sports such as skiing. As we know, that quilted approach is still used in today’s down ski wear.

Christmas is always a special time for kids. “Tis more blessed to give than to receive!” But every kid knows Christmas is about receiving. There’s making the list and then revising the list. There’s the difficulty getting to sleep on Christmas Eve. And the pre-dawn rush in the dark to open those first gifts from Santa.

As I grew up I realized that if I cared about something really specific, the safest way to get it was to save up my money and buy it for myself. As I became a serious skier, this was particularly true for ski equipment and gear. I wasn’t going to ask my parents for any skiing-related items. 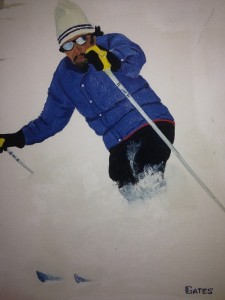 So when it came time to open gifts at Christmas 1970, my parents seemed unusually nervous. They handed me my “big” present. I opened it and there was an Alpine Designs down parka. Yes, I needed a new parka and had never had a down parka, but I hadn’t asked them for one.

It was the perfect gift in fashion, function, and fit! It was an unexpected surprise. It was also perfect because I realized how far out of their comfort zone my parents had gone to buy this for me. Their nervousness showed in their remarks such as “The clerk said that you can exchange it if you’d prefer something different.” There would be no exchanging this special gift.

While I no longer have the parka, I do have the painting a friend made of me skiing in the parka. I gave the painting to my parents the following Christmas. That picture hung on my parent’s wall for the remainder of their lives. It now hangs on my wall welcoming folks to our “Skiing Room”!