First, some comments I received on my “guest column” by the late Bill McCollom. In that column, Bill described participating in one of the last hike-to-ski downhill races in the Northeast which was held on New Hampshire’s Mt. Tecumseh in 1961. I heard from Peter Penndorf that he had been in that race as well!

Bob Burley knew Bill McCollom as a “consummate gentleman and intrepid competitor!” Their careers overlapped both as coaches for the Killington Ski Club and as Masters racers. Bob also paid a great tribute to Bill by saying, “He left every person, race and trail better for his presence.” 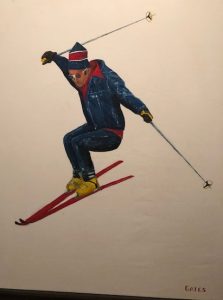 Next, I heard from my friend Jerry Gates who now lives in North Carolina. Jerry was the artist behind the painting I shared in my column on “The Perfect Gift!” He sent along a painting of himself skiing on our 1973 European trip. Jerry did add the disclaimer that he may not have been as good a skier as he looks in the picture or as good an artist as these pictures may indicate. I told him that our age allows us to take certain liberties!

I’m always amazed when right after I write a column on a topic, I see something related pop up in the media. My column on Powderhorn Mountaineering had just been published when I saw an article on this season marking Beaver Creek’s 40th anniversary. There was a picture from the December 1980 grand opening which included dignitaries such as President Gerald Ford and the whole Beaver Creek management team wearing … you guessed it, Powderhorn parkas!

In a similar fashion, the day my column on Sun Valley Serenade was in the Reporter I also received the latest issue of the New England Ski Museum Journal. The main topic was on ski photographer Christine Reid. One of her featured photos included was a full page close-up of Marilyn Shaw! In the accompanying text it echoed that she had been the skiing double for Sonja Henie in the movie. I contacted Jeff Leich, Executive Director of the NESM, and he told me his source had been the book by Allen Adler which also provided the text for Marilyn’s U.S. Ski and Snowboard Hall of Fame write-up.

Now on to this week’s column. When was the Toll House double chair added? That would be in 1983 for the 1983-84 season. I was a little surprised that it wasn’t older. I mean the chairs are spaced so far apart that I almost sat on the ground waiting for the next chair! Also that means it’s a newer lift than the Lookout which was installed for the 1979-80 season.

John Thurgood had the correct answer and says, “While it is a slow lift The 15 minute ride gives one some time to reflect on things.” It sure does. Why am I riding this lift, for example. John has a good excuse since he owns one of the Toll House condos.

Also responding with the correct answer was Tom Hubbs. Tom also mentioned that the Lookout chair opened during Christmas week 1979 and on the first day it ran, Tom was one of the lucky ones to be evacuated from the lift! Obviously Lookout had an inauspicious start. 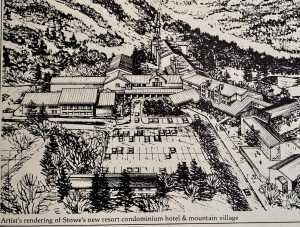 Greg Dirmaier provided more details concerning the Toll House double and the fact that it was part of a plan to expand the old Lodge into a new condominium hotel which was to be called the “Inn at the Mountain.” In case you ever wondered why the base of the lift sort of sits out by itself, the plans actually called for it to be in the courtyard of that new condominium hotel. Greg says the overall project was doomed by the high interest rates of the era, a national gas shortage, and Act 250 permitting issues.

Of course 20 years later the vision started at the Toll House was implemented in the Spruce Peak development.