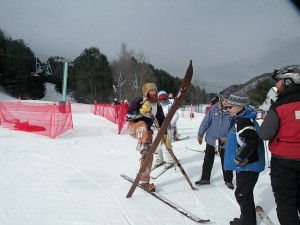 Red Lussier and his Skis

Red Lussier is an imposing figure with his red hair and full red beard.  But not as imposing as his skis: they are wide planks over seven feet long and no steel edges in sight!  Then there is Suzy “Chapstick” Chaffee in her lavender, sequined stretch pants and her 1960’s skis that look really skinny compared to today’s skis much less Red Lussier’s monsters!

What brings these two together is the 8th Annual Antique Ski Race held at Suicide Six and sponsored by the Vermont Ski Museum.  Competitors use vintage equipment where vintage is defined as 1975 or older.  There are three categories: Strictly Vintage (skis, boots, and bindings are vintage); Wood (only the wooden skis are vintage); and Metal/Glass (only the skis are vintage). 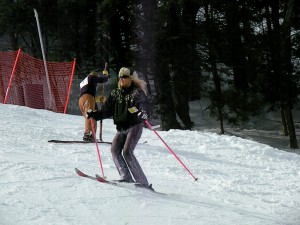 It’s a laid-back group of about 25 men and women that gather at the top of the course set on The Face at Suicide Six.  Appropriately the course is marked with bamboo gates.  The competitors’ skis are a trip down memory lane: Kneissl White Stars, Head 360’s, Rossi Stratos, Dynamics, wooden Kastles.  However there are a couple of competitors that stand out based on their vintage equipment. 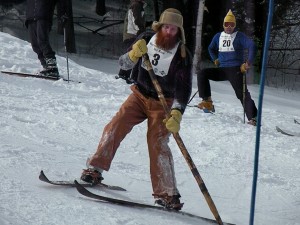 Red Lussier is from Westfield, Massachusetts, and collects old skis so he just had to pick which pair he would bring for the race.  His skis appear to be from the late 1800’s as they do have camber, but not much observable side-cut.  He made the leather bindings himself based on drawings of old skis.  He uses a single pole that is about 6 feet long and 2 inches in diameter.  The single pole technique goes way back to the origins of skiing (cave drawings from 5000BC depict the single pole), but gave way in the mid-1800’s to the two pole approach.  He adeptly maneuvers through the course giving everyone a glimpse of what early ski races must have been like. 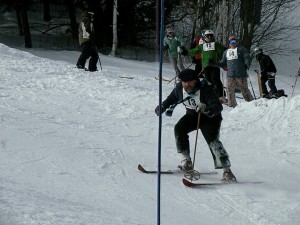 Steven Davis is from White River Junction and is using his father’s skis circa 1948.  The skis are equipped with cable bindings and Steve is using leather boots.  I believe he and Red are the only competitors using leather ski boots.  Steve’s poles are bamboo with the huge baskets. On his second run in sight of the finish area Steve takes a spectacular fall to the cheers of the assembled spectators.  His run times may not put him in the winner’s circle, but he easily wins the best fall award at the ceremony after the race.

If you want to share in the memories, there will be another vintage ski race on Sunday, March 27th, at Stowe’s Spruce Peak again sponsored by the Vermont Ski Museum.