Mitch Cubberley and his Cubco 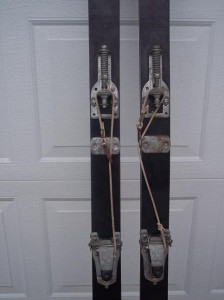 The Cubco was the creation of Mitch Cubberley, a mechanical engineer from New Jersey.  He started working on ski bindings in the early 1950’s and used his engineering know-how to address many binding-related issues.  His binding was a step-in; the toe could release in all directions including up; and the heel could release in a forward fall.  He also designed the first ski brake.

Actually Cubberley and Earl Miller both can claim firsts in terms of step-ins, multi-angle release, and ski brakes.  They apparently were unfriendly rivals who developed different solutions and held different opinions of the other’s work.  But that’s a story for another time.

Back to the Cubco binding.  With so much going for it why did many of us look down on Cubco owners?

Well, the most common complaint from experts was that Cubcos had a tendency to pre-release.  Ed Pearson echoed this in his response, but still felt the binding was a good choice for kids.  I know I observed intermediate skiers in the moguls where they were a little off balance, but not falling, and “thwangzzzz” – now they were falling!

Then there were the metal plates you screwed to your boot toes and heels.  These snapped into the binding providing metal-on-metal contact that gave a more consistent release than metal-on-leather.  However this made rather clumsy tap shoes out of your boots as you click, click, clicked your way through the base lodge.

Then there was that noise the Cubcos made when they released.  When you’re falling the last thing you want is something to draw attention to that fact, but there it was.  The springs in the binding were exposed so there was nothing to muffle the sound when they recoiled.

And maybe the reason we didn’t like them was because they were ugly!  Wolfgang Lert whose company distributed Cubco bindings put it best: “Mitch (Cubberley) had a positive genius for designing the most effective and at the same time the ugliest-looking bindings in the ski industry!”

Cubberley’s ski brake was a further example of this.  Unlike today’s dual pronged brakes, the Cubco brake had a single blade-like prong significantly longer than today’s.  This was because the brake was designed to flip the ski on its side when released.  Because of its knife-like appearance the brake became known as the “toad-stabber”!

While it was (and is) easy to poke fun at Cubco bindings, we owe Cubberley and his contemporaries a debt of gratitude.  Their work improving release bindings reduced ski injury rates by 75%!  And after a binding released, the use of ski brakes meant you wouldn’t be flogged to death by your own skis.  Step-ins meant no more bending over to put your skis on.  We take these all for granted today, but they all can be traced back to Mitch Cubberley.