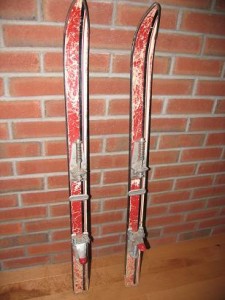 (Following was contributed by Ed Pearson via e-mail.)

“All three of our children learned to ski at ages 2 &3 at a small mountain in upstate NY on the same pair of skis passed down from the oldest to the youngest. The skis were white Victor Skis with Cubco bindings. However, Brent, our youngest, wanted red skis and not the white skis his older brother and sister had learned to ski with. So, using a  can of red spray paint, he received a pair of bright red skis. We still have the skis and the boots (minus the Cubco attachments). The Cubco bindings were considered very safe as the toe released in all directions. At least they were safe for someone under 50 pounds as, when used by adults, the Cubco had the reputation of pre-release.

The love of skiing has stayed with all three and especially the older two. Beth currently resides in Sun Valley and Brian and his family reside in Santiago, Chile where he has an adventure travel company . One of its specialties is to organize and arrange ski trips, including ‘Cat’ skiing at Arpa near Aconcagua .”