What were your most memorable Skis?

Let me start things off by sharing my most memorable ski: the hart Javelin.  That is the correct spelling using the lower case “h”!

Maybe it’s because the Javelins were my first really good skis.  I had always skied on wooden skis and not even good wooden skis.  As I have shared before, I had a propensity for breaking wooden skis except for a pair of Northland Commanders.  By the time I graduated from college the Commanders could have qualified as rocker skis since any camber was long gone.  They were also missing segments of the screwed-on steel edges!

In 1968 the hart Javelins were state-of-the-art and they improved my skiing amazingly.  When I’d go back to ski with my old buddies, they’d ask what the secret to my improvement was.  The answer was simple: hart Javelins!

Another factor that made them memorable was their price.  At $200 they were one of the most expensive skis available and I paid full price.  In the autumn of 1968 I had visited the Alpine Shop in South Burlington many times to drool over those beautiful white and black Javelins.  Yes, they were expensive, but I was out of college and had a good paying job.  Sometime in October I walked in, pointed to a pair of hart Javelin GS 205’s and said “I’ll take those!”  It may not have been the easiest sale Jann Perkins ever made, but it had to be one of the quickest!  And, by the way, that was the first and last time I ever paid full price for a pair of skis.

The price and improved skiing led to another reason the Javelins were memorable.  Skiing on Javelins meant you got noticed.  They were a status symbol.  Some people would find that a detractor, but I believe the pressure actually helped me ski better.

I was never disappointed by the ski.  The Javelins were good in all conditions and particularly liked powder.  For skis of that era their combination of metal and fiberglass held pretty well on ice.  Actually at that time I thought they were great on ice, but one of the big improvements in skis since the 1960s is their ability to hold on good old Eastern ice. 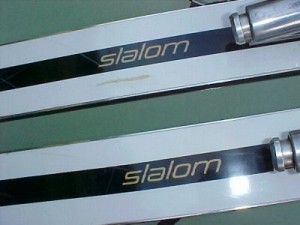 Eventually I got a pair of 207 Javelin Slaloms which were even better on ice and in the moguls although I still preferred the GS in powder.  The Slalom Javelins created a love affair with the slalom ski that is still with me today.

A few years back hart came out with an anniversary model of the Javelin that had the same cosmetics as the original.  I was so tempted!  I even thought about paying full price, but practicality won out over sentimentality.

In 1952 Harry Holmberg worked for the Gregg Ski Company in St Paul, Minnesota.  He knew that being able to produce a ski with a seamless, integrated metal edge would revolutionize the ski industry, but he also knew that it presented manufacturing challenges.  So he turned to his brother Hartvig Holmberg and a friend, Ed Bjork, who had extensive manufacturing experience outside the ski industry.  The three started their own ski company and called it “hart” after Hartvig’s nickname (which had also been their father’s nickname)!

Hart produced their first ski in 1955 and reached their peak success with the Javelin.  The company subsequently changed hands many times over the years.  The skis maintained a following in the freestyle community highlighted in the 1990s by the success of Jonny Moseley.  In 2005 Bill Holmberg Jr. regained family control of the company and hart skis are once again made here in the U.S. with the company headquartered in Ogden, Utah.