The story behind why someone would do this begins during the 1960s.  The French Ski Team led by Jean Claude Killy had great success during the decade of the 60’s.  Georges Joubert, a professor at the University of Grenoble, began studying the skiing techniques that produced this success.  He teamed up with a former French Olympic Gold Medalist, Jean Vuarnet (yes, the same Vuarnet that started the line of sunglasses) to write a book describing the winning techniques.

When the book was translated into English and brought to America it was retitled How to Ski the New French Way, a title that Joubert felt was inaccurate.  The book introduced some new terminology into our skiing vocabulary.  Two of those terms were “avalement” and “jet turn.”

Avalement is a French word so the emphasis is placed on the last syllable which is pronounced “mont”.  Bob DiMario, Louise Thompson and Archie Archdeacon all provided the correct answer describing avalement.

Bob DiMario gave the most technical definition: “to actively absorb terrain variations by using the leg muscles to retract and extend the legs under a relatively stable body. Literally the term means to ‘swallow up’ the change in terrain.”

If you watch any of the top Freestyle Mogul skiers, you see avalement in action.  Their upper body stays level while their knees are pistoning up-and-down to keep the skis in contact with the snow.  Louise Thompson says that avalement is why she’s had to have both knees replaced!

A by-product of avalement was the fact that at the completion of a turn, the skis “jetted” out to begin the next turn.  In a racing turn the jet happens very quickly and probably would be hard to detect with the naked eye.

So what does all this have to do with Popsicle® sticks and duct tape?  Well, once the skiing media got hold of all this technical information, they tended to concentrate on the “jet turn.”

Stu Campbell in the Skiing Heritage Journal highlighted an issue of Ski magazine with a cover article supposedly about avalement entitled “Look!  They’re Sitting Back!”  Joubert and Vuarnet had explicitly said that sitting back should be avoided, but that somehow was missed in the Ski magazine article. 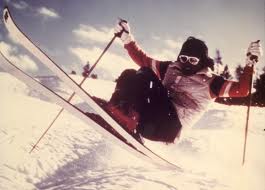 Stu also felt high speed photography played a part in popularizing the jet turn.  Pictures froze skiers such as Patrick Russell in that split second jet turn and made it look like it was the overall goal.

Then Hot Doggers like Wayne Wong made the jet turn a signature move, balancing on just the tails of their skis.  Suddenly everyone was trying to sit back and “jet” their turns.  But it wasn’t easy.  You needed leverage, leverage that a higher boot back could provide.  So out came the Popsicle® sticks and duct tape to increase the leverage.

In the 1970-71 season Jet Stix appeared on the market.  Invented by Jack Nagel, they were fiberglass shaped to fit the lower calf above the boot and secured in place using the top boot buckle.  They were a definite step up from Popsicle® sticks and duct tape.  Lange eventually released its own version called “The Spoiler”. 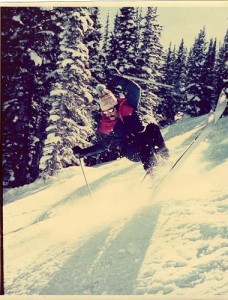 Me "jetting" a turn

The jet turn began to influence both boot design and ski design.  Boot backs got higher and higher until it seemed they were right up to your knees.    Jet Stix were no longer needed.  Ski makers also began making the tails of skis stiffer to facilitate jet turns.

So whatever happened to jet turns and high backed boots?  Did we suddenly get a better understanding of ski technique?  Nah!  In my opinion it was just pre-empted by the next fad which was short skis.  Not the short skis we have today which were engineered for their shorter lengths, but just shorter lengths of the popular skis of the day.  Sitting back on the shorter tails usually left you sitting in the snow.