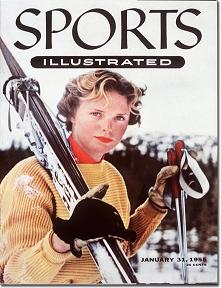 She was a promising young U.S. ski racer.  In 1954 at the age of 18 she won the United States Junior and Senior Slalom titles.  She was a bright hope for the U.S. looking forward to the 1956 Olympics.

She was beautiful.  She was romantically involved with Buddy Werner, the best U.S. male skier of the era.  The camera loved her and so she was on the January 31, 1955 cover of Sports Illustrated.

In one of those strange quirks of fate, the same week that she appeared in Sports Illustrated she was competing in a race at Alta, Utah.  On the Race Course Saddle trail heading towards Lower Rustler, she missed a pre-jump on a bump.  The bump launched her off the course into the trees and spectators.  She would suffer a broken back with resulting paralysis from just below the shoulders down.  The bump at Alta is still called the “Kinmont Bump” named for Jill Kinmont.

I received a very special response to last week’s trivia from someone who was at that Alta race!  Nancy Tibbott Twitty knew Jill Kinmont and said:

“I was supposed to race for Sun Valley, but erstwhile coach Nelson Bennett wouldn’t let me – injured knees wouldn’t handle (those) conditions. But I was standing right at the spot with Sally Neidlinger (Susan’s twin) from Hanover. It was horrifying – we could do nothing – I’ve not forgotten it in an equally horrid 57 years. There were several other bad crashes – lots of breaks – it was an Olympic tryout race. Training day had been warm and sugary; race day was FRIGID and my God it was FAST. We all felt they should have put slowing gates in the huge open shush before the 90 degree left turn.

Jill was incredible before and after – the movie was pretty accurate.” 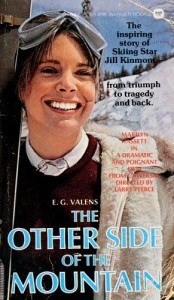 “The Other Side of the Mountain” movie was a tear-jerker.  And indeed Jill’s life had a lot of trauma and tragedy.  In addition to her ski accident, her relationship with Buddy Werner ended.  Dick “Mad Dog” Buek, another ski racer and an extreme athlete before they invented the term, swept into her life only to be killed in a plane crash.  A long-distance relationship with Buddy Werner was rekindled and he was killed in an avalanche.  Her father died of a brain tumor.

But that’s not how Jill looked at her life.  In fact after viewing the movie she supposedly said that she cried for the girl on the screen “but I had no sense that it was me!”

In the 1950’s a disability like Jill’s meant a very limited life.  For that matter it usually meant a short life.  After her accident doctors only gave Jill five years to live.  Family and friends including Andrea Mead Lawrence urged Jill not to accept such a limited prognosis.  Jill applied the same competitive attitude to her life that had made her a successful ski racer.

Jill graduated from college.  Many schools rejected her based on her disability, but UCLA accepted her.  She would graduate with a degree in German.

Jill was a teacher.  While at UCLA Jill realized what she really wanted to be was a teacher, but UCLA would not admit her to the School of Education. They felt that she would not be able to handle the stairs in most schools even though Jill had successfully worked around that same impediment attending UCLA.

Jill would eventually get her teaching certification in Washington state and would hold teaching positions there and in California.  In summers she would return to her hometown of Bishop, California, to teach students from the nearby Paiute Indian Reservation.

After the 1975 movie, Jill was able to move back to Bishop to live full time.  She continued teaching and started the Jill Kinmont Indian Education Fund.  Toward the end of her 35 year teaching career she worked with students needing special education.  When Bishop opened a new school aimed at students with special needs, the principal asked the students to submit three possible names for the school.  They only submitted one: Jill Kinmont Boothe. 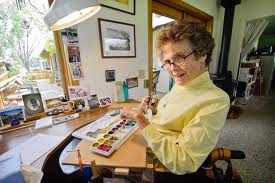 Jill had a family.  Jill married John Boothe in 1976 and became Jill Kinmont Boothe.  Their relationship was the basis for the movie sequel “The Other Side of the Mountain Part 2.”  They adopted a daughter and eventually had grandchildren.

Jill was a respected and accomplished artist.  She painted watercolors using a special brace that could hold her brush.

Jill Kinmont Boothe passed away on February 9th, 2012 from complications following surgery.  She was just days short of her 76th birthday.  Jill lived a life filled with accomplishments and she will be remembered for her abilities and not her disability.  As one writer put it, the wheelchair “was just a place for Jill to sit.”