I know it’s not ski season yet, but I had to come out of my summer hibernation to share some happenings that should be of interest to RetroSki-ers.

When did the Vermont Ski Museum move to Stowe?  The museum opened its doors here in 2002 making 2012 its 10th year.  To mark the 10th anniversary and the fact that it is now the Vermont Ski and Snowboard Museum, the Museum is undergoing significant changes.  If you’ve driven by the museum lately you may have noticed the new landscaping.  There are also a series of events planned to celebrate the anniversary.  But before I talk about them, some history:

Roy Newton of Brandon started the Vermont Ski Museum in 1988.  At that time he was publishing the Vermont Ski News and realized that many of the artifacts from Vermont’s important role in skiing history were being lost.  It was a labor of love for Newton as he collected over 4000 pieces of Vermont skiing memorabilia including many items from Vermont Olympians.  He invited visitors to view his collection in a shed located behind the Brandon Inn.

In 2000, the Town of Stowe was trying to figure out what to do with the old 1818 Town Hall which was the oldest public building in continuous use in town.  Originally built on the site where the Community Church is now located, the building was moved to its current location in 1863.  Through the years it had served many purposes including housing the Fire Department.  But the building was in need of significant repairs.  A group of Stowe business people saw an opportunity to use the building for the ski museum. 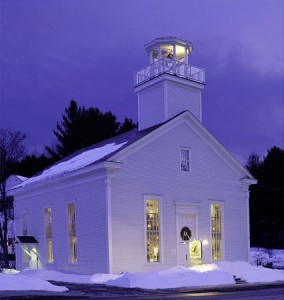 Members of the Stowe group including Ken Biedermann, Bruce Nourjian, Chris Francis, and John Springer-Miller negotiated with Newton to obtain rights to the Museum and its collection.  With a significant donation by Chuck and Jann Perkins, a lease from the town for the 1818 Town Hall was arranged.  The building is now called the Perkins Building in recognition of their generosity. A successful capital campaign led to the complete renovation of the old building.  The Museum officially opened its doors in Stowe on August 16, 2002.

In 2010 the Museum’s Board voted to change the name to the Vermont Ski and Snowboard Museum.  Plans were made to update the Museum to recognize Vermont’s contribution to the development of snowboarding as well as skiing.  Those plans are being implemented for the 10th Anniversary observance.

So now let’s look at those planned events:

Thursday, September 27: Grand re-opening of the Museum including a new long-term snowboarding exhibit and a special year-long exhibit from the Burton Archives called One Track Mind. Jake and Donna Carpenter will be inducted as the first snowboarders in the Museum’s Hall of Fame.  Plus there will be a special showing of the newest Burton snowboarding film called “13”.

Sunday, October 14: Celebrate the opening of the new Nordic skiing exhibit including a buffet dinner at the Museum.

Friday, October 19: Jay Nash in concert at the Matterhorn – a special fund-raising event for the Museum to kick off the Hall of Fame weekend.

Sunday, October 21: The Hall of Fame induction dinner to be held at Trapp’s.  In addition to the Carpenters and Minnie Dole, inductees include Trow Elliman, Tiger Shaw, and Leslie Thompson Hall.  The Paul Robbins Ski Journalism Award will be presented to Sporty Bell and also posthumously to Linda Adams.

Tickets and additional information for all the events can be obtained at the Museum website www.vtssm.com.

The dream of Roy Newton has found a receptive home in Stowe, Vermont.  The Museum annually hosts more than 8000 visitors. They come from Stowe, from Vermont, from North America, and even from other countries.    The Museum is a wonderful attraction and neighbor which deserves our support.  The Museum undertook a special appeal to raise $50,000 to fund the 10th Anniversary renovations and to-date they’ve raised just over $35,000.  If you haven’t donated already, consider making a donation to support this worthwhile asset.  Donate!