Spring skiing always brings back memories from past springs. Last week’s trivia question took us back to a warm day of spring skiing in the early 1970s in some huge bumps on Liftline. One of the first skiers in our group did a spectacular face plant on the back side of one of those bumps. By the time I got to him there was a growing red stain in the snow, but all the other people on scene were laughing! What really happened? 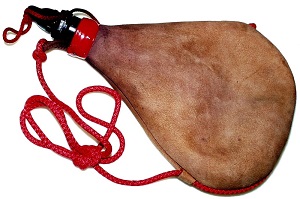 Bob Stewart was quick with the correct answer: “Oh no! He ruptured his bota! A terrible injury, especially on a sunny spring day.” Will Spalding also recognized the situation that I described.

A bota or wineskin is a leather bag used to hold wine – well, any liquid, but wine was usually the choice. The spout has a cap that can be removed for filling and the cap contains a nozzle with its own stopper that is used to dispense the wine. The bota originated in Spain where it was made of goatskin. Evergreen pitch was used to seal the seams on the inside. These original botas had to be conditioned so that the wine didn’t pick up the taste of the pitch. The modern bota is available with latex or plastic liners which require no conditioning.

I’ll follow Bob’s lead and use the term bota rather than wineskin. There is a whole new generation who think Wineskin is a software wrapper that allows them to run Microsoft-based games on their Apple computers!

Botas became very popular during the early 1970s as the United States began to discover wine. They were particularly popular on the ski slopes where the carrying cord could be slung around your neck and the bag carried under your parka.

A bota was something to be shared so there was a proper way to drink from one. Putting your mouth directly over the spout identified you as a novice and made you the target of ridicule. So how did you drink from a bota? I brought one along so you could try it out.

So, first hold the spout with one hand and support the bag with the other hand. Now tip your head back with your mouth open, lift the bota toward your mouth, and squeeze the bag to squirt the wine into your mouth. Whoops! You probably shouldn’t have worn that white turtle neck to try this. Well you can always wear a sweater over it. Yes, it takes a little practice to get this right.

The mark of an expert bota user was that once he or she started drinking, the bota would be moved to arms-length while still drinking! You want to try that? Just remember you’ll have to increase the pressure as you move the bota. Whoa, not that much pressure! Here’s a tissue, you’ve still got some wine on your nose. Yes, this is a lot of work to just get a drink of wine.

I used to have a bota, but it got lost somewhere along the line. My favorite wine to put in the bota was Mateus. A Portugese wine in a Spanish bota, how cosmopolitan! Whatever happened to Mateus anyway? It was very popular in the early 70s, but I don’t see it on the shelves these days, at least not in the old distinctive bottle. I’m sure some of you remember those bottles which made great candle holders.

Since we’re talking about 1970s wine, I somehow feel the need to mention Boone’s Farm. No, I never put it in my bota, but I did drink it from other people’s botas. Boone’s Farm had flavors like Strawberry Hill and Apple, all very tasty, plus you could drink a lot due to the low alcohol percentage. I believe today Boone’s Farm isn’t even classified as wine, but a malt beverage due to its low alcohol content.