Happy Thanksgiving! I’m back for another season of skiing history and trivia. For the second year in a row, this early winter has a “Retro” feel to it: cold weather and early snow! Hopefully it’s the harbinger for a good ski season.

As you may remember , last season marked my 50th in Vermont and I reminisced about that great snow year which culminated in skiing Tuckerman Ravine on the 4th of July. 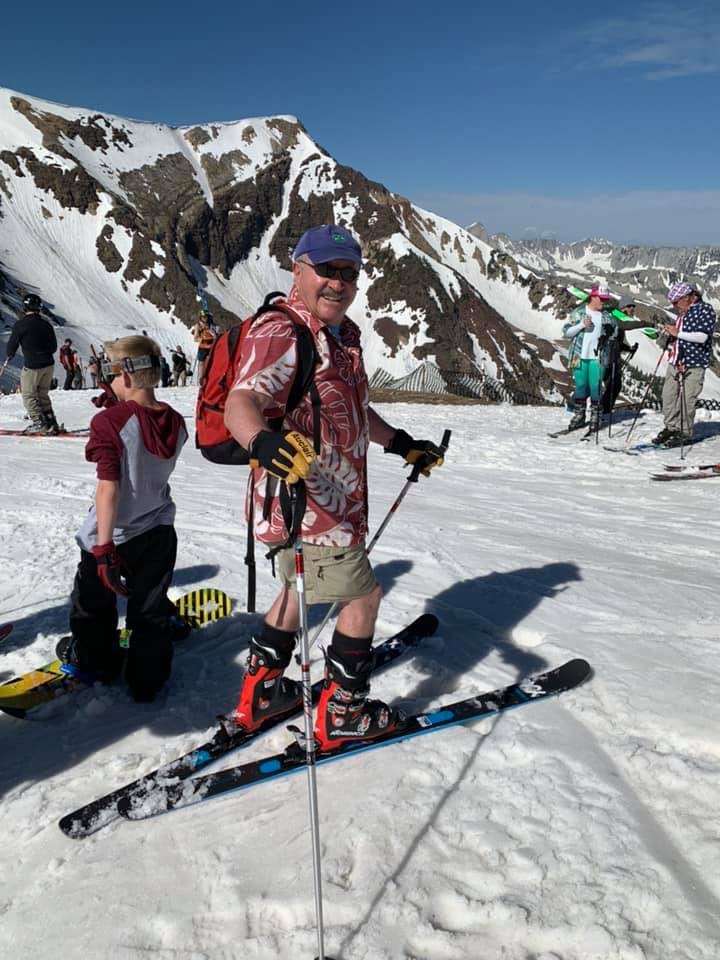 So I couldn’t resist an opportunity to ski on the 4th of July this past summer. Only it wasn’t at Tuckerman although there might have been a small patch of snow still left there. My wife and I were attending a non-skiing event in Salt Lake City around the 4th. Snowbird kept extending its ski season thanks to the 711 inches of snow they had received so we kept wondering if there would still be skiing. We had our Snowbird season passes from having spent January and February there. Sure enough, Snowbird announced that the 4th of July would be the last day of their ski season.

We were staying at a hotel in downtown Salt Lake City and as fortune would have it, there was a ski rental place right across the street from the hotel. We got a 25% discount for being their last rental customers of the season! We did receive a few odd looks carrying our equipment across the street to the hotel in the 90+ degree heat.

On the 4th, skiing would be from 8am to noon before the conditions got too soft. So we left the hotel before 7:30 which should have gotten us there by 8am. To quote Yogi Berra: “It was déjà vu all over again!” Traffic was backed up in Little Cottonwood Canyon so it took closer to an hour – just like we experienced in the winter! And we were lucky to get a legal parking spot! Parking got to the “creative” stage right after our arrival.

We took a jammed shuttle up to the Tram base. On the Tram Plaza there were people everywhere, well, actually there were lines everywhere! There was a line for rental equipment; there were two lines for the huge breakfast they were serving; there were lines at the ticket windows. So where was the line to get on the Tram? Someone pointed at a queue whose tail was half way up the hill to the Cliff Lodge. 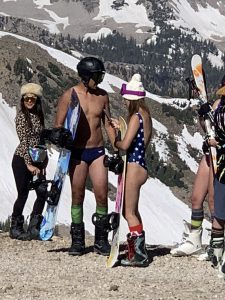 The good news was the Tram line got longer after we got in it. The bad news: it took us an hour to get on the Tram. Some folks would wait two hours just to get on the Tram! But there was a lot to look at while you were in line. There were costumes, patriotic and otherwise. Some folks were dressed like it was midwinter (“Damn it. I’ve got one ski outfit and that’s what I‘m wearing!”) And there were some dressed for the beach.

One of the best moments of the day occurred when the Tram car lifted off on our upward journey. Someone on the car started an impromptu Star Spangled Banner which was enthusiastically joined by the approximately 100 folks. It was amazingly well done! I admit I got goosebumps! 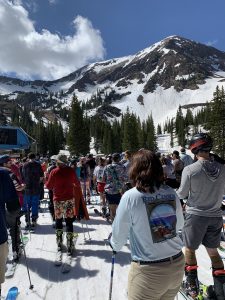 The skiing was off the Little Cloud lift. The conditions were springlike: firm with the top surface softening in the sun.  The temps started the day in the 40s, but reached the 60s. The skiing was good! You did have to choose your path wisely since choosing poorly meant walking to the next snowy section. The lift line for the chair was looong, but seemed to move fast. That’s partly because everyone was in such a good mood! In the winter there is not much fraternizing in the lines, but on a the 4th of July everyone was a friend.

We took two runs and then faced our next challenge. To return to the base you had to ride the Tram back down. But the top of the Little Cloud chair is below the top of the Tram. It’s probably only a couple hundred yards, but it’s steadily uphill and you’re at approximately 11,000 feet  … in your ski boots … carrying two pairs of skis (thank you, Meg!) But we made it! 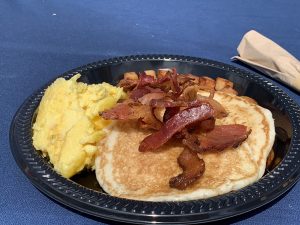 Once back at the base, we found the lines for breakfast were gone so we grabbed pancakes, eggs, bacon, and homefries. We sat down to eat as the band began to play. I’m not sure how to describe the band, sort of a biker-heavy-metal group whose members seemed to be my age! But they were loud.