In all the ads for the 2020 Stowe Winter Carnival you’ll see that it’s the 46th Carnival. That would mean the first was in 1975. However there’s more to the history of the Stowe carnival than that!

Craig Burt writes about the first Stowe Winter Carnival in his memoir, “We Lived In Stowe.” During the winter of 1921, a group of residents met to come up with something that would fight the “cabin fever” of short days and cold temperatures. The concept of winter carnivals had been around since 1909 when Vermont Academy held the first recognized winter carnival in the United States. The Stowe group planned a winter carnival that would feature both outdoor and indoor activities to appeal to everyone.

For outdoor activities, they built a ski jump, a toboggan run, a skating rink, and an ice palace. All of these facilities were built on Marshall Hill and the fields below it. In other words, right behind the current elementary school. Burt writes that the toboggan run was completed first and the fun of a quarter mile ride helped motivate people to help build the other facilities. Even the pastor of the Community Church gave approval to work on Sundays, just not during the church service!

Craig Burt and a local craftsman of Swedish descent named Sorensen were in charge of building the jump. They consulted with Dartmouth, the Nansen Ski Club from Berlin, New Hampshire, and the Lake Placid Club. The tower for the jump was an impressive 45 feet high.

The only problem with the jump was that the landing hill was not steep enough. Burt said that the jumpers’ skis sounded like rifle shots when they landed. One of the notable jumpers was Bing Anderson, a Norwegian from the Nansen Ski Club, and he blew out of both skis, finishing on just his boots!

The highlight of the indoor activities was a minstrel show that actually raised $1000, helping defray some of the costs of other facilities.

Mike Leach, historian of the Mount Mansfield Ski Club, had the answer that the first Stowe Winter Carnival was on February 21, 1921. He also sent a clip from the Burlington Free Press reporting on the successful first event. That article highlights that more than a thousand people attended the one day event. It also covers the participation of students from Dartmouth, Norwich, and UVM in the various competitions.

The Stowe Winter Carnival would be repeated in 1922 and 1923, but then would go on a hiatus until the Mount Mansfield Ski Club picked it up in the 1930s. At that time, alpine skiing events were added including having Fred Harris come up from Brattleboro to introduce a new event: slalom.

Fast forward to 1975: Stowe hadn’t had a Winter Carnival for quite a few years. Much like in 1921 the town of Stowe needed something to energize it. Enter Gar Anderson! Gar decided the town needed a Winter Carnival, but not just any Winter Carnival. Gar organized a 10 day extravaganza with everything “from a ham-and-bean dinner at the Community Church to a polo demonstration at an indoor stable!”

For a skiing event Gar landed both the men’s and women’s Professional Freestyle Associates tours. There would be mogul, aerial, and ballet competitions with all the big names in freestyle. That brought the ABC Wide World of Sports to Stowe along with other national media. 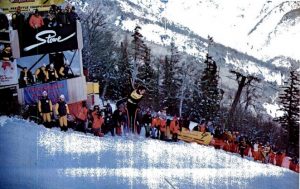 The mogul competition was held on the Upper National with natural snow, skier-created bumps. I say that to distinguish between today’s manicured, artificially-created mogul courses and the 1975 National. And of course, the temperature was below zero with a brisk wind! I was there to watch the competition and got a kick out of the competitors, particularly those from the west, huddling in the Octagon to stay warm. But in the true spirit of freestyle, when their number was called, they peeled off the extra layers and launched themselves down the National to the music blaring from the huge speakers. I did notice that some of the westerners had some problems with the eastern ice, I mean packed powder.

I had some personal involvement in another event at that 1975 Carnival. At the time I was part of a speed skating club in Essex Junction. We had seen that there were going to be speed skating races for kids under the age of 18 as part of the Stowe Winter Carnival. I helped transport a carload of kids from the club up to the races which were held at the old Jackson arena. When we got there, it turned out there was an 18 and over category. Since I had brought my speed skates, the kids insisted I enter. There were three competitors:  a young man on hockey skates, a young woman on figure skates, and me! I won! Somewhere in my treasures is a T-shirt that never fit me which proclaims “Stowe Winter Carnival Speed Skating Champion!”