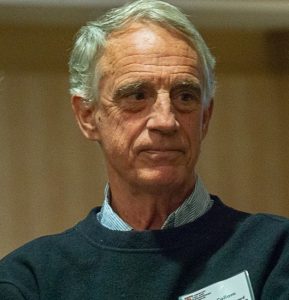 Bill McCollom was a Vermonter, a Retro-Skier, a ski racer, a coach, a teacher, a writer, and a friend. He passed away unexpectedly in June. COVID, while it didn’t cause his death, robbed the rest of us of the opportunity to memorialize and celebrate his life. So this week Bill will be my guest columnist. The following is a column he wrote in December 2000 for Ski Racing entitled “The Last Ascent.” (So the “I”s refer to Bill.)

“The aging process doesn’t offer many benefits, unless you happen to be a stockholder in Advil. However, I claim as a benefit (albeit dubious) my nearly fifty years of skiing involvement, which has provided me a firsthand look at an entirely different age of skiing. With no grooming, no safety bindings, no miracle fibers, this era might seem primitive to some, but there was still the same exhilaration, and the same opportunities for pure uninhibited recklessness. In this regard, my skiing experiences take me back just far enough to have participated in one of the last vestiges of ski racing insanity – climbing to the top of a mountain and racing two and a half miles down a scrawny, twisting path littered with rocks, stumps, and weeds.

The Civilian Conservation Corps had a hand in building most of the original downhill trails in the East in the early 1930s. By the end of that decade, most major eastern mountains had downhill trails up to three miles long with vertical drops in excess of 2,000 feet etched into their wooded slopes. The Mount Moosilauke Carriage Road in New Hampshire was first raced in 1927 and was the site of the first national championships in 1934; Mt. Mansfield’s famed Nose Dive in Vermont, which was completed in 1935, hosted the 1938 national championships; and the Thunderbolt Trail carved into the side of Mt. Greylock in Massachusetts was open for skiing shortly thereafter. By 1939, Whiteface Mountain in New York boasted a downhill of over 2,100 vertical, as did Mt. Tecumseh, New Hampshire (now Waterville Valley) and Pico Peak in Vermont with the Sunset Schuss dropping over 2,000 feet.

Even in 1939 downhill racing was recognized as the original extreme sport. The 1939 Ski Bulletin stated, “Downhill ski racing is perhaps the most dangerous sport. To win a man must literally ski with one foot in the grave.” The Thunderbolt Trail, for example, was between 18 and 80 feet wide, contained several pitches of 35 degrees and included jumps of over 50 feet. An estimated five thousand spectators lined the course to see Dick Durrance win the 1935 event in two minutes forty-eight seconds.

The Pico Derby, started by Swiss ski school director Karl Acker, was modeled after the  Parsenn Derby in his hometown of Davos. Racers would first run the downhill, and the top twenty-five finishers then competed in a two-run slalom to determine the combined winner. Racers used skins where they could and otherwise hiked the two-mile trail on foot, carrying wax and extra clothes. The downhill forerunners in the 1939 race were Acker and a young woman by the name of Stevia Korzun, who several years later became the mother of Olympians Rick and Suzy Chaffee. Middlebury native Ed Gignac bested close to ninety racers that year to take the downhill portion of the event with a time of three minutes and fifty-one seconds. 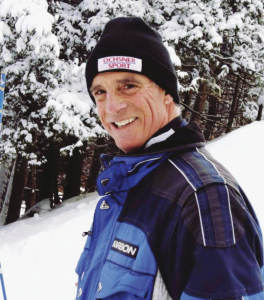 I was just fifteen when I made the trek up Mt. Tecumseh in 1961. Although I remember every detail of the day, I was oblivious that the final walk-up downhill race in the East would occur just three years later. I simply trudged up the 4,000-foot peak trying to memorize the maze of S turns, drops, and blind knolls. I soon discovered it was much more fun chatting with the buddies I had conned into joining me, so I decided to go with Plan B – just follow the tracks. Since the juniors started first, I was still wiping the sweat off my goggles when the starter commenced the countdown. Within ten feet, my overzealous competitive instincts overrode all rational thought, and I started cutting the turns tighter and tighter, paying no heed to the previous tracks. A bit more than half way down, just as I was mentally composing my victory speech, I cut a turn too tight and caught my inside ski in loose powder.  Three somersaults followed in rapid succession, each punctuated by a face-plant. Although lacking in grace, I did stick the landing and come back up on my feet. After throwing off my goggles and spitting out all the snow stuffed into my mouth, I continued to the finish, hardly missing a beat.

I don’t recall how I placed, or how anyone else did for that matter. But I still have a pin from that day – my connection to a bygone age of ski racing.”

Thanks, Bill, and Ski in Peace!