A few weeks back I wrote about how some friends shared digitized images from 40-50 years ago and that triggered so many memories. It also motivated me to have the movie I took of our 1970 ski trip to Aspen and Vail digitized!

For Christmas 1969 my parents gave me a very basic Super 8 camera, basically point and shoot with no zoom or shutter adjustments.  A group of us had already planned a ski trip to Aspen for February and I had aspirations of being the next Warren Miller.

Just for any younger people reading this, let me review how taking what we now call a “video” worked in those days. The Super 8 camera took film cartridges which contained 50 feet of film or about 4 minutes of video. You sent these off to be developed which took days if not weeks before you received the developed film. Then you viewed the results using a projector. Editing the results was a manual process of cutting and splicing the developed films.

For that first movie I literally just spliced the 50 foot segments together in chronological order since I didn’t have any sophisticated editing equipment. That’s one reason I had never had this movie digitized.

When I received the digitized version, I viewed the movie for the first time in approximately 40 years! And wow, what memories it brought back. There are some segments that have historic value as well as nostalgic value.

The footage includes driving Route 6 over Loveland Pass through the Seven Sisters slide area, past the summit at 11,990 feet which is higher than almost all the Colorado ski area summits, and then the long switchbacks that lead down to Arapahoe Basin. In those days it was the only way to get to Vail, Aspen, and the Summit County areas. It was a white-knuckled rite of passage for eastern skiers – a snow-covered road with no guard rails and frequent white-outs! 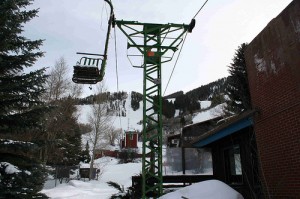 The film also captures the old Aspen single chair. Stowe has always been proud of its single chair and could claim in 1940 that it was the longest ski lift in the world. The Aspen single chair came along in 1947 and laid claim to that title. The chair was some 8,480 feet long, or half-again as long as the Stowe single! What an introduction to western skiing it was for many of us easterners. It’s not uncommon in the east to be able to see the whole lift from the bottom. However western mountains are broader so typically you see just to the first ridge, then when you ride up, the mountain reveals itself. The ride up that Aspen single chair took almost 20 minutes! Each successive ridge revealed more and more mountain and the anticipation was hard to control. And you weren’t even at the summit as there was another lift above the single. That old single would be replaced in 1971.

We also skied a day at Vail on this trip. The remarkable footage in the movie shows us skiing powder in the back bowls. I say “remarkable” because this was at least two days after the snowstorm and we had the bowls pretty much to ourselves! Of course that was in 1970. By 1977 when I spent most of the winter in Vail, the bowls would be tracked out by 10:30 in the morning on a powder day!

Another benefit of getting this 1970 movie digitized and uploaded to YouTube was that I reconnected with some old friends who were in that movie, but I hadn’t seen for about 40 years. They enjoyed the movies and the memories it triggered. We all enjoyed catching up on what life has brought us in the intervening years.