Earl Eaton was born December 10, 1922 in Eagle, Colorado. Like most families in the Eagle River valley, the Eatons scratched out a living through farming, ranching, and logging. In the early 1900s the valley was actually one of the largest growers of lettuce in the United States.

Earl began skiing as a child after his father made him some skis. By 7 years old Earl was already skiing what now is Beaver Creek. He grew up hunting, hiking, and skiing the nearby mountains.

In 1940 Earl went to work for the CCC on some of the nearby projects they tackled. Shortly after that he was drafted into the U.S. Army where he served in the Army Engineers. Despite being a skier he was not part of the 10th Mountain Division. Between the CCC and the Army, Earl learned a lot about heavy construction. 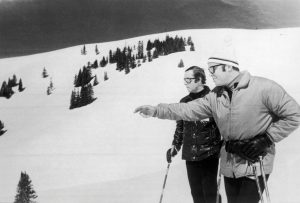 After WWII, Earl went to work for the Aspen Skiing Corporation. In the summers he worked construction cutting ski trails and building lifts. In the winters he was on the ski patrol. It was in Aspen where Earl met Pete Seibert.

Seibert had dreams of starting his own ski area and through his 10th Mountain Division training at Camp Hale, he was familiar with the potential of the Eagle River valley. Seibert found a kindred spirit in Earl Eaton. With Earl’s knowledge and experience with the terrain, together they explored the various possibilities.

Earl’s first choice was Beaver Creek which the U.S. Forest Service had just assessed as having potential for ski area development. However access to the National Forest was blocked by private land, the 2200 acre Willis Nottingham ranch. And the Nottinghams were not interested in selling.

Disappointed, Eaton then showed Seibert another option further east toward Vail Pass. The story goes that Seibert wasn’t too impressed until they got to the top and looked out over the Back Bowls. Vail was born! As I’ve written before, Vail gets its name from Vail Pass which in turn got its name from the highway engineer, Charles Vail, responsible for building Route 6 through the mountains.

While Seibert had the financial contacts to make Vail possible, Eaton had the construction experience to make it a reality. Eaton laid out the trails and lifts and then supervised their construction. Vail officially opened in 1962.

Once Vail became an established resort in the late 1960s, Eaton would leave the company. He felt the company no longer needed his skills and strengths. What it did need was not the type of work that he liked to do. While Pete Seibert’s name is far more recognizable, he always insisted that Earl Eaton was co-founder of Vail.

The proposed 1976 Denver Olympics resurrected Earl Eaton’s original idea of developing Beaver Creek as a ski area. In 1972 the Forest Service once again did an assessment of Beaver Creek and again considered it ideal for a ski area. This time the Nottinghams were ready to sell their 2200 acres and Vail Associates purchased it for $4.6 million. The Denver Olympic Organizing Committee designated Beaver Creek as the site for the alpine skiing events of the 1976 Olympics. I received no answers to last week’s trivia question. 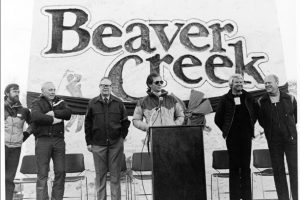 Of course no sooner had Vail committed to the land purchase, than the state voted not to fund the Olympics and the Denver games were canceled. However Vail continued to pursue the plans for building Beaver Creek. It would take 8 years to design the resort, get through the permitting process, and build the first phase. Beaver Creek officially opened on December 15, 1980, and Earl Eaton was there!

Beaver Creek became an exclusive world class destination resort known for its customer service, such as chocolate chip cookies handed out on slope by the area hosts. It regularly holds World Cup ski races, but still offers terrain for beginners to learn.

Beaver Creek has expanded several times which led to development in the surrounding Eagle River valley and the problems that come with it. While Earl Eaton was willing to accept some of the responsibility for that development, he wasn’t beyond its effects. When asked why he wasn’t skiing as often, he replied, “I have a lifetime ski pass, but I don’t have a lifetime parking pass!”