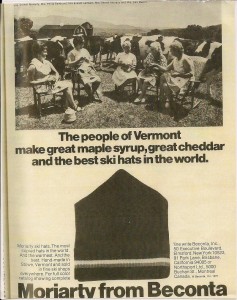 After World War II, skiing’s popularity in Vermont really began to grow and it brought out the entrepreneurial spirit in Vermonters.  Kermit and Anabel Moriarty lived on the Mountain Road in Stowe with their two sons Marvin and Darwin in the house now occupied by All Seasons rentals.  The Moriartys began to take in boarders during the ski season for $16 a week, $24 with food.  They attracted a lot of serious skiers including ski patrol and ski instructors.  Anabel had always knit hats for her family and soon the boarders were requesting that she knit hats for them as well.

That could have been the end of the story, but Anabel’s son Marvin was an exceptional ski racer.  He was named to the 1956 U.S. Olympic team at age 17, making him the youngest man ever to be selected.    Of course when he went to Cortina to compete, his hat went with him.  Suddenly a local Stowe fashion gained an international market and the Moriarty Hat and Sweater Company was born!

It took Anabel three hours to knit one hat by hand so the challenge was to meet the increased demand for hats.  Anabel parsed the work out to other home knitters, knitting machines were purchased, and a shop was built next to the Moriarty home. (That shop now houses Creative Consignments.) Eventually they were able to produce a hat in less than 20 minutes.  In 1962 Moriarty sold 3000 hats; in 1964 8000 hats; and in 1965 an estimated 40,000 hats!  By 1975 Anabel was using more than 50 home knitters. 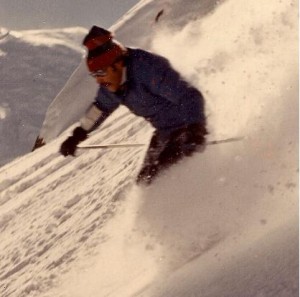 Me wearing my Moriarty in Chamonix, 1973

During all this growth, Anabel kept control of the family business.  Advertising, marketing, distribution were all handled from Stowe.  Janet Godin who worked for Anabel remembers modeling the hats, designing brochures, taking and filling orders.  She can still look at a Moriarty hat and tell you what model number it was (yes, there was more than one model.)

What made the Moriarty hat so popular?  It certainly wasn’t the looks!  Your standard Moriarty hat was plain with the characteristic three points on the crown.  In my opinion there are three reasons for the hats’ success and I list them not in order of influence:

The Moriarty Hat and Sweater Company stayed in the control of the Moriarty family until 1985 when the business was sold to Ed Morrison.  One of the additions to the original hat that Morrison made was a turtle fur liner on the headband which was lot easier on the forehead and ears than the old scratchy wool.

In 1993 Morrison negotiated a deal for the company to be the official licensee to distribute ski hats and sweaters with the Grateful Dead dancing bears and skeletons.

Ed Morrison died in 2008 and the Moriarty business has not been active since.  The Vermont Ski and Snowboard Museum has access to Morrison’s left over inventory and may now be the only place you can purchase a new Moriarty hat.  What better gift for the RetroSkier on your Christmas list than a new Moriarty hat!  You can check them out at the museum shop or online at http://www.vtssm.com/store.  They even have some with the Grateful Dead dancing skeletons!